It’s that time of year again, where we go back to the hellish world of Gilead in The Handmaid’s Tale. The Handmaid’s Tale is not for everyone. This show tackles triggers such as rape, violence on women and LGBTQIA, and sexual assault. This show is hard to handle and hard to stomach. There are many scenes, I am unable to watch and have to look away from the screen until it’s over. This show does not hold back, it’s very graphic and while it’s an excellent show, extremely well written and well acted, it is not for everyone. If you have any triggers related to rape or sexual assault of any kind, either don’t watch this show or watch with extreme caution. Now, let’s talk about 5 reasons to love The Handmaid’s Tale.

END_OF_DOCUMENT_TOKEN_TO_BE_REPLACED

The wait is finally over, people! Lucifer is back on Netflix, and I spent the last week binge watching it like one of the thirst queens in this week’s Fandom Funny. Read on to learn the best reasons to watch this hilarious show: END_OF_DOCUMENT_TOKEN_TO_BE_REPLACED

Within the Doctor Who universe, there are many things to make us geek out and get pumped up. I could do an entire list on all the great things about Doctor Who. Today, though, I’d like to talk about just one of the terrific elements of the series. That one thing is the absolute awesomeness of getting a brand new Doctor!

It just so happens that we are currently experiencing this exact phenomenon. We have less than 3 weeks until Season 11 of Doctor Who premiers worldwide with the first adventure of the 13th Doctor, Jodie Whittaker. The anticipation is high and fans all over the world are figuratively holding their breath as we wait to see exactly who this new Doctor will be and how her personality will differ from every Doctor who came before.

Already, there is controversy stirring as the Doctor has switched gender for the first time in the 55-year history of the series. However, the switch is not unprecedented in the show’s lore. And even aside from that massive change, there are all the questions, mysteries, and unknowns that come with any new Doctor, be she female or male.

Let’s take a look at ten of the reasons it’s so exciting whenever the Doctor regenerates and a new Doctor arrives on our TV screens:  END_OF_DOCUMENT_TOKEN_TO_BE_REPLACED

It’s been a rough few weeks for Brooklyn Nine-Nine. The network-that-shall-not-be-named tried to throw this precious gem of a show in the trash, but the wonderful angels at NBC have rescued B99 for another season and all is right with the world (well, not the world, but let’s not get started on that). After having my heart ripped out, stomped on, and taped back together by NBC, I decided that now is the perfect time to make a list celebrating all the reasons to love Brooklyn Nine-Nine*. There are about a million reasons to love this show, but I’ve narrowed it down to my personal top ten. If you haven’t watched Brooklyn Nine-Nine yet, go binge this show on Hulu right now and then come back and read this list. So sit down and get ready to shout, “Nine-Nine!”

END_OF_DOCUMENT_TOKEN_TO_BE_REPLACED 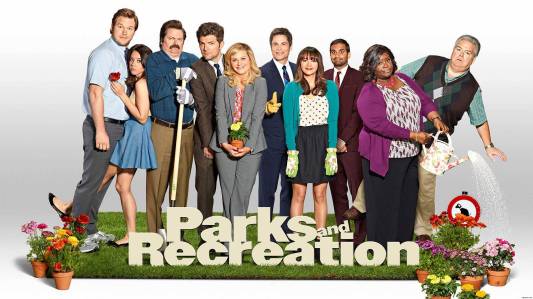 Parks and Recreation was a beloved sitcom on NBC from 2009-2015. Starring a fantastic ensemble cast led by Amy Poehler of SNL fame, the show became a cultural phenomenon and a ratings powerhouse for 7 seasons. While that was going on, I ignored the series completely. I knew about it and even caught tiny snippets of it here and there, but took little time to sit and watch. I lumped it in with the cringe humor of The Office and decided it wasn’t for me. Recently, my friend and sister geek Taylor and my husband both convinced me that I might actually like the show if I gave it a chance. It turns out they were right. It took me 3 weeks to binge my way through all 7 seasons. And now here we are. Depending on how you look at it, I’m either 3 years or nearly a decade late with this list. OR… Maybe it’s never too late to love great television?

Either way, here’s my list of 10 reasons (not the only 10 reasons, not even the top 10 reasons, just 10 of the reasons) I love Parks and Recreation.

END_OF_DOCUMENT_TOKEN_TO_BE_REPLACED

All right, I’m going to make a shocking admission right here, right now. You’re going to be floored when you hear what it is, especially given the nature of our site, but here we go: I don’t watch much television. Between kids and work and life, I have become infinitely pickier about what I watch. With that in mind, I am here to declare that I have devoted some of my precious television-watching minutes for a wonderful program that I highly recommend to all of you: The Golden Girls.

END_OF_DOCUMENT_TOKEN_TO_BE_REPLACED

Recently, I hit a show hole on Netflix and decided to go back and binge through something I’d seen before. I chose Season 1 of CW’s The Flash. I love this show and could argue that it is one of the most (if not the most) enjoyable series on TV right now. After going back through the first season, I kept going through Season 2 (not currently available on Netflix) until I caught up to the most current episode. It didn’t matter that I’d seen all these episodes already, even as recently as two weeks ago. The Flash is still a good time. Here are 10 reasons why…

END_OF_DOCUMENT_TOKEN_TO_BE_REPLACED

For those of you who may not know who Sam Witwer is, let us enlighten you.  He has played several science fiction and horror roles, which already makes us love him, but he also embraces the “geeky” in his real life as well.  Here are some reasons why we “heart” Sam Witwer.

END_OF_DOCUMENT_TOKEN_TO_BE_REPLACED

Since her introduction in season four of Doctor Who‘s regenerated life, River Song has managed to become an instant classic character in the show’s epic line-up. The brain-child of Steven Moffat, River first showed up with David Tennant’s 10th Doctor, went on an emotional journey through time with Matt Smith’s 11th Doctor, and is scheduled to meet up with Peter Capaldi’s 12th Doctor during this week’s Christmas special. River is vivacious and voluptuous, sexy and romantic, a badass with a vulnerable side. She’s a doctor in her own right, a professor, a historian and an archaeologist. She has been Cleopatra, she created the oldest graffiti in the universe, she breaks out of high security space prison whenever she feels like it and she jumps out of space ships into deadly outer space while wearing a ballgown and a smile. She’s just totally stinkin’ cool! Here are only 10 of the innumerable reasons to love River Song. END_OF_DOCUMENT_TOKEN_TO_BE_REPLACED