Fun fact about me, I love, love, love The Office. I watch The Office about 8-10 times a year. I never get tired of it. I am The Office expert. I know all the quotes, I hum the theme song to myself on multiple occasions, I have a Dunder Mifflin shirt, basically I am The Office Queen! I will take my crown and medal made out of a yogurt lid now (if you get that Office reference, then you’re going to really enjoy the rest of this article). I just love this show so very much. I watched it for the first time in my late high school years/early college years and I caught up enough to watch the last ever season when it premiered and I had to wait week after week to see what would happen next and wonder how it would end until that very last episode when I was a human pile of tears. It’s safe to say The Office is without a doubt, by favorite show in the history of forever. Let’s start this list!

Boy, oh boy, these are some colorful characters. They’re crazy, silly, funny, kind, obnoxious, self-centered, and amazing. Each character is so insanely different from the others, with intense, yet funny back stories. Some characters have great development throughout the show, some don’t (which makes sense for those characters). More than anything, these characters are relate-able and I think we all know at least one Kelly or Dwight or even a Michael. These characters are some of the funniest and realist I’ve seen on a show. I just love them all to bits, except you Creed, you creep me out. 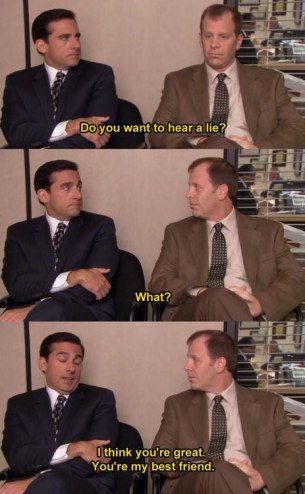 There are so many long running jokes in the show, like the one above, where Micheal insults Toby over and over again. Poor, Toby, he just needed a win and he never really got it. Or that Ryan was the “fire guy” since he almost burnt down the whole office warming up a cheesy pita. Of Andy calling Jim “Tuna” just because he ate a tuna sandwich on his first day. There’s so many and they’re all so funny and they show up in different seasons and connect back together and it makes you think of how much or how little that particular character has grown. Or it makes you realize how one of a kind this show is and soon their inside jokes become yours and you feel like you’re a part of The Office too.

Oh, the romances of The Office. They make me smile, they make me cry, and sometimes even make me question what is love? There’s of course, Jim and Pam, which make me swoon every time I re-watch The Office and fall in love with their relationship all over again. They are #goals. Then there is Michael and Holly, which is just weird, but also adorable and ugh, his proposal to her had me in full on ugly crying mode. There’s even Dwight in Angela in all their weird glory, finally have their happy ending and start a family. All these romances are just so real and lovely and shows us that everyone has a soulmate, even Dwight.

These characters are so normal! They watch TV for 14 hours, met too Kevin! They keep snacks at their desk, me too Kevin! When you eat a taco and you get really excited and you crush the taco in your hands, me too Kevin! Or when you want to do something nice for your co-workers so you make your world famous chili, but you spill it all over the floor. If I knew how to make chili, I’d be right there in the same boat as you, Kevin. Okay, maybe I relate a lot to Kevin, because he’s a pretty normal guy who just loves to eat and always has snacks. We should all be more like Kevin. This has been a PSA.

I think holiday episodes of any show are my favorites because I love holidays. Halloween episode? Yes, please. Christmas episode? Don’t mind if I do. The Office holiday episodes are some of the best! Every year there’s usually a Halloween party where everyone dresses up in relevant to that year costumes. Or if you’re like Jim, you put in the smallest effort and you put 3 circles on your shirt and call yourself “3 hole punch Jim”. Oh, and the Christmas episodes are wild. Phyllis and Angela are always fighting about planning the holiday party, Meredith gets white girl wasted, people use the holiday party as an excuse to confess feelings for others, it’s all a wild ride. And I love it!

The man, the myth, the legend. This man has absolutely no sense and is hilarious. I would totally read his book Somehow I Manage. I would love to see his movie Threat Level Midnight in theaters. Michael has the very best intentions with everything he does and everyone he meets. He just wants friends and inside jokes and to one day have a wife and kids and his own family cell phone plan. He just happens to sometimes hit people with his car and promise elementary children to pay for their college tuition and then try to back out of it years later. He’s a regular, every day person, like me and you, but like 1000% funnier.

The pranks are so good! Stapler in jello? Yes, solid gold prank. Convince Dwight is getting faxes from future Dwight? Love it. Dress up like Dwight and pretend to be him? 10/10 would watch this prank again. The pranks are a part of the humor of the show but also the main driving force between Dwight and Jim’s relationship. Jim can’t stand Dwight’s “holier than thou” attitude, so he pranks him. But over the years, not matter how funny those pranks were or how mad they made Dwight, a true friendship developed between Jim and Dwight and I love it. The pranks are Jim’s way of keeping Dwight level headed and sometimes Dwight even pranks Jim and it’s amazing. 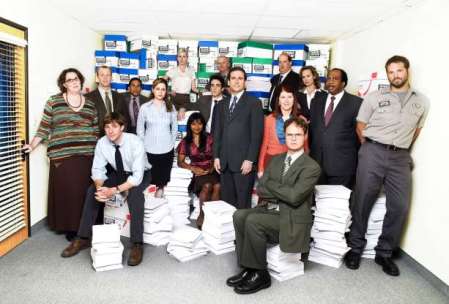 When you think of The Office, the first word that comes to mind probably isn’t diversity. But this show is actually pretty diverse. There’s Daryl a black man, whose a single father, and agrees to star in Michael’s Threat Level Midnight movie to show his daughter a black man in the role of the President of the United States (this was pre-Obama). There’s Oscar who is Latino and gay, who runs the finance department and has the best vogue moves this side of Scranton, PA. There’s Kelly who is an Indian woman. She runs her own department and voices her opinions on everything from Twilight to Brangelina loud and proud. There’s Stanley, a black man who is a top seller at Dunder Mifflin and doesn’t put up with Michael or anyone else’s crap. And there’s Jan, a strong woman who is Michael’s boss. It may not seem like a lot in a cast who is predominantly white, but every diverse character counts. Every POC, LGBTQIA, and strong female character in any show is representation and representation matters so, so very much. 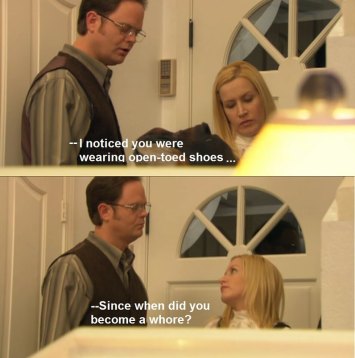 Oh, the story lines, such good story lines, some of which I was not sure how they would end. Like, Dwight and Angela had been so on again and off again for so long that once she married the Senator, I thought she was done with Dwight. Of course, she wasn’t, because you can’t stop true, weird love. But their whole relationship developing, de-evolving, developing again over the years was a great story line. Or like Andy. Andy started out some what angry and spiteful, but cheerful none the less. I didn’t foresee him running away on his parents boat to the Bahamas, abandoning Erin, and quitting his job to become a full time actor and signer, but overall good story line even if the ending kind of perplexed me a bit. A lot of the characters on the show were also writers for the show so the story lines always stayed good and light hearted and overall made sense for the character.