I just got back from Y’allFest! Woo! It was amazing as always. Lots of books, lots of fellow book nerds, and lots of authors! If you haven’t heard of Y’allFest, it’s a  young adult book festival in Charleston, SC. There are book signings, author panels, ARC (advanced reading copy) giveaways, and so much more! It’s an amazing event and this is my 3rd year going and it just gets better and better each year. I love going to get tons of books and attend a few panels, but mostly I like going to experience the amazingness of the YA book community. There’s so many people there and while you wait in line for an ARC or for a panel or signing, you strike up conversations about books and life and you end up with a new friend and a few more book recommendations. It’s honestly just so wonderful. I highly, highly recommend this festival. On another hand, since I just got back, I decided to share my Y’allFest haul with you guys! So here’s a list of the top 10 ARC’s* I got from Y’allFest!

*not in any particular order

1. You Owe Me a Murder by Eileen Cook

I was actually surprised to see this book at Y’allFest purely because I had researched all the books publishing companies were bringing to hand out and this one was never mentioned, but I was so happy to see it being given away! I listen to a podcast called My Favorite Murder and they’ve highly recommended this book. I had to grab it. This book follows Kim who has gone through a rough break up when she meets Nicki. Nicki jokes that she’ll take care of Kim’s ex if Kim will take care of someone for Nicki. Kim thinks it’s just a joke to make her feel better about her recent breakup, until Kim’s ex turns up dead. And Kim is now being blackmailed to hold up her end of the bargain. Will she commit a murder or take the blame for one? This sounds so amazing and I’m so super happy that I was able to get an ARC of this book!

2. Last of Her Name by Jessica Khoury

First of all, this cover is gorgeous. Like, it’s simple, yet eye catching, I love it. Also, fun fact about me, I love books (also shows and movies) set in space. Such a unique setting that you can do so much with. So it’s no surprise that I made sure I got this book while at Y’allFest. Sixteen years ago in the galaxy called the Belt of Jewels every member of the royal family was murdered, including their youngest daughter Princess Anya. With the royal family dead, a strong government rules in their place. In the present, Stacia lives her with her friends and having fun. Until a government ship comes to town and accuses Stacia of being the dead Princess Anya. Her friends fight to protect her and hide her away from the government, but what will Stacia do when she is forced to choose between a life in secret with one of her friends or saving another from the government?  I love space books so freaking much. I wish I could just shove this book into my brain already.

3. If You’re Out There by Katy Loutzenhiser 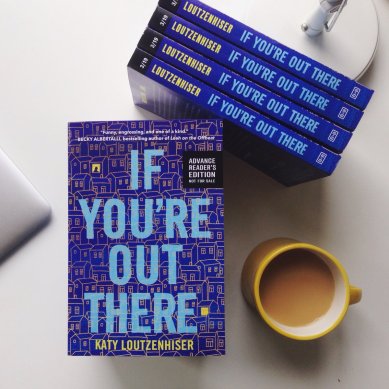 This book was on the must grab list for me. This book is about Zan who is struggling when her best friend moves to California and suddenly ghosts her. Everyone tells her that her best friend, Priya, is just adjusting to life in her new home and to not worry about her. But Zan thinks something is wrong and she finds an unlikely friend in Logan who listens to her concerns about Priya and believes her. Together, Zan and Logan laugh themselves into an investigation about what is going on with Priya. When a weird selfie presents a clue to their investigation to becomes clear that Priya may not want to answer Zan’s e-mails, but maybe Priya can answer. It seems like an interesting story about friendship, ghosting, and just bit of a mystery. I’m excited to read this!

You guys, it’s a book set in the world of Buffy the Vampire Slayer! Nina and her twin sister Artemis have grown up at the Watcher’s Academy, which trains young adults to be trained as guides for Slayers. Slayers are a line of girls gifted with the supernatural ability and strength to fight the forces of darkness. Nina feels pressure from her mother, who is a prominent member of there Watcher council, all Nina wants to do is take more medic courses and learn to be a healer. That is until one day, Nina’s father dies protecting the one and only Buffy, and suddenly Nina is not only the Chosen One, but she’s the last Slayer, ever. Nina must now train with her watcher, Leo, fight demons who eat happiness,  and her weird nightmares. And then bodies start piling up and Nina must figure out what’s happening and save those she cares about and herself. Oh my god. So much yes! So stoked about this book! 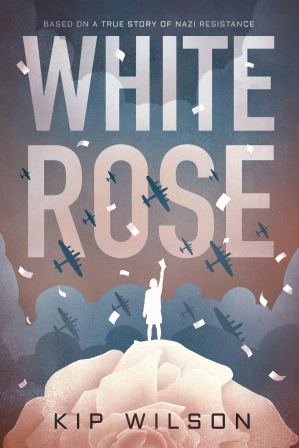 I already adore this book. The author follows a similar style to that of Ellen Hopkins and tells this story through poetic form. I’ve loved all of Ellen Hopkins books with their poetic form, so I’m certain I will enjoy White Rose. Besides the form, this book follows Sophie Scholl who is an anti-Nazi activist during World War II. Sophie is one of the founding members of the White Rose group, which is a nonviolent resistance in the middle of Nazi Germany. Sophie, her friends, and her brother are fighting hard against the Nazi movement and even when Sophie and her brother are arrested for treason, they are determined to stay brave and fight back. Lots of people are saying this book is powerful and some characters are loosely based on real people. I really enjoy historical book and I’m interested who this book lives up to the hype.

6. Once & Future by Amy Rose Capetta

Another lovely cover. These guys are killing it this year, for real. This book follows Ari, who crash lands on Old Earth. She pulls a sword out it’s resting place and becomes the newest reincarnation of King Arthur. She comes across a young Merlin who tells her that they need to break the curse that keep bringing Arthur back after all these centuries. Their quest is to take down the unkind, and cruel government and bring peace to all mankind. Totally easy. No big deal. I’m really interested to see that Capetta does with a re-telling of King Arthur and Merlin. These characters have been in shows, movies, and countless stories and other re-tellings. I’m excited to see how she makes this book stand out in it’s own way.

7. The Cold is in Her Bones by Peternelle van Arsdale

I actually got this book by accident. I was trying to get a different book and got this one instead, but after reading the description, it’s turned out to be a happy accident. This book follows Milla who know that demons are real and that only her fear can keep her safe. On her families farm, her only friend is her brother Niklas. One day, a girl named Iris comes to stay at the farm and Milla is hopeful to finally have a real friend. But Iris has a secret she’s not sharing, the village Iris comes from, is cursed by a demon who possess girls at random and it looks like Iris might be the next victim. When Iris is captured and imprisoned with all the other possessed girls, Milla must leave home for the first time and break the curse before she becomes a demon too. I love a good story about demons. I’m really happy I ended up with this book instead of the other one. This book sounds incredible.

8. We Contain Multitudes by Sarah Henstra

This cover is adorable, I love it so much! Jonathan and Adam, also known as Kurl, are paired up in english class and assigned to write each other letters each week as pen-pals. With each letter, the two boys develop a quick friendship that eventually grows into love. But with a world full of homophobia, bullies, hate, and terrible family secrets, Jonathan and Adam struggle to hold onto their budding relationship and even each other. This book takes a look at young love, and what it takes to overcome the obstacles to make relationships work and to live ones truth. I’m so very excited I got my hands on this book. I love diverse books and characters and I can’t wait to read this and love the hell out of it.

9. The Lonely Dead by April Henry

This was a surprise book. One publishing company had blind dates with a book set up and this one had ghosts and revenge written on the wrapping paper and I knew it was the book for me. This book follows Adele, who can see ghosts and talk to them. She’s always tried to deny her gift until she finds her ex-friend,Tori in a shallow grave and realizes Tori is really dead. Suddenly, Adele’s gift feels more like a curse. With Tori dead, Adele becomes the prime suspect in her murder. To clear her name, she must work with Tori’s ghost to find the real killer before the killer finds Adele first. I love a good ghost story. I adored Meg Cabot’s Mediator series growing up, and this has a similar vibe to it. I’m hella stoked about this book!

Another stunning cover. I’m shook. Princess Aurelia is an heir that no one wants and she’s banned from using her blood magic. Surrounded by spirits, she’s forced to flea her country after an assassination attempt. Aurelia begins to disguise herself as a commoner in a new country and discovers the freedom and happiness that her title and crown never allowed. She begins to perfect her blood magic and even starts to fall for a man who before, would have never been allowed to rule beside her. But soon the ghosts from her past start to catch up with her and she is forced to return to fix a problem that only she is able to fix. Aurelia will be forced to choose between the weight of the crown and her new found freedom. Normally, I don’t like fantasy books, but I’m interested in this one and I’ve heard that Aurelia is going to be a strong female character and I’m all about that.

So, that’s my list of the top 10 ARC’s I got at Y’allFest this year! Have you heard of any of the books? Which books are you looking forward to in 2019? Let me know in the comments!