It’s the best time of the year! No, it’s not Treat Yo Self 2018, instead it’s the week that a new season of American Horror Story premieres! And it’s almost fall, which means it’s almost Halloween, which also means it’s time to put up all the decorations! In the creepy spirit of this incredible show, I thought I’d take a look back at all the other great seasons and pick out my favorite characters. It was so hard to get this list down to just 10 because there are so many amazing and scary characters. So while you’re waiting for the next new episode, check out my list* and geek out with me about all these terrifying, but lovely characters!

*characters are in no particular order

Constance Langdon has sass for days and I’m here for it. I don’t agree with a lot of what she says or does, but she was such a strong character and a part of every bad thing that happened this season. Just a girl chasing her dreams of being star and instead becomes a wife and mother, despising her children for stealing her youth and beauty. She shows no love, only fierce loyalty to herself. After killing her cheating husband, dating a man who killed his wife and kids to be with her, it’s no surprise that all the death and bad in the world seems to hang around her. The Queen of Bitch if there every was one. Her character had no real growth, but a hell of a background. I love her and her sassy, old school, southern charm. I can’t wait for her return this season! 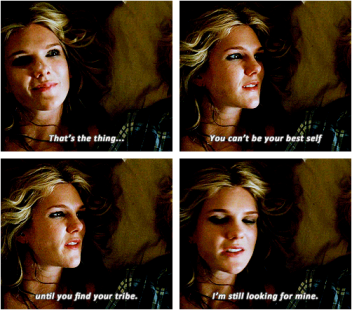 Sweet, sweet Misty Day. She was so southern, so obsessed with Stevie Knicks, and has a hell of a punch. I felt for her all season 3 because she just wanted to find a group of people she belonged to and they belonged to her. Even when she finds the coven, dumbass Madison bullies her. But sis, I was living for that scene when Misty decided she wasn’t going to take Madison’s shit anymore and promptly knocked her upside the head a few times. YAASS, girl! She even comes back to life twice! TWICE! You were a true queen, Misty.

A smart and witty reporter trying to blow the lid off Briarcliff Psychiatric hospital and the horrible things they do to the patients there. But of course because this takes place in America in the 1960’s, the staff at Briarcliff find out what she’s doing there and use her sexual orientation as a reason to lock her up and treat her with conversion therapy. But this girl is no one’s bitch. She makes it through that hell hole and all that is done to her and she comes out on the other side strong and she writes one amazing story exposing Briarcliff and many other institutions like it. I adore her.

She’s bad, she’s scary, and I kind of love it. When she said the above quote, I was terrified of her. She tries to kill her students several times. She has a love hate relationship with her daughter. Like no one is safe around her. Piss her off and she comes for the throat. This woman takes no crap. An real icon. But what made me really like her character was the overall story arc and how she grew and didn’t grow as a person before she died. How she let her vainness and hunger for power and control consume her until her very last breath. But every time I re-watch  Coven, every scene she’s in inspires me to get in touch with my inner boss queen.

Poor Violet, you deserved so much better. She got ignored by her parents because they were too obsessed with their own drama. She was severely depressed and just a lost teenager. She gets taken advantage of by a homicidal ghost who doesn’t know what love is (shout to Constance for that) and she’s bullied at school. Not to mention all the other weird crap happening in her house. Like bless her whole heart. And then she ends up purposely/accidentally killing herself, trapping her spirit in the murder house forever with all the other ghosts. Her character and her whole story made me so sad and really feel for her. I hope the after life is treating her way better than life did.

Fun fact about me, I love a good serial killer. I love a good serial killer story too. James Patrick March is loosely based on H.H. Holmes, one of America’s first serial killers. James is both a doting husband and vicious serial killer throughout the 1940’s and on in the hotel he built with traps and murder rooms. It’s just all so interesting! I also may just be odd and have a weird fascination with the scary and creepy. James was somehow absolutely terrifying and the comedic humor at the same time. It worked, I was here for it. Hotel was not one of my favorite seasons, but James was definitely a shining star throughout the entire season

Sweet, dear Ethel with her Baltimore accent and curly beard. Ethel was as strong as she was kind. When she walked in on her husband trying to kill her child, she took her child and left and raised the child on her own. Ethel doesn’t judge anyone, but she does’t take kindly to people judging herself or any of the other members of Elsa’s freakshow. Ethel will pop off and I love it. I cried when she went to the doctor and was told she only had a little bit of time left to live, but was so moved that the doctor treated her with kindness and respect instead of disgust like others do just because of her beard. Ugh, I cried big alligator tears. Ethel is one of the best characters of the Freakshow season, hands down.

Queenie, is a true queen, it’s even in her name! Queenie didn’t have the best life growing up, stuck in the foster system, desperate for a true home and love from others. Queenie has the gift of being able to hurt herself, but transfer all the pain to another person. I was screaming when she shoved her hand in the oil and transferred the pain to that rude ass customer. I am here for it. Yes, Queenie! And she brings a splash of diversity to both the coven itself and witchcraft in general. As she mentions, there is nothing but white women portrayed as witches in movies/TV shows, so it’s so refreshing and needed to see Queenie as a member of the Coven and one of the strongest and smartest witches among them. Slay, girl!

All the scenes with Cricket Marlowe scared me the most throughout the My Roanoke Nightmare season. From his seance scenes to him talking about solving past crimes, I literally had chill bumps. Also, I just love this actors voice. I love that he both respects the spirits, but isn’t there to play around. He’s determined to get Flora back from the ghost Priscilla and throws just as much shade at the ghosts as they do to him. I love a sassy character and this season needed the sass, all the other characters were too uptight. Cricket brought a much needed break from everyone else, making him stand out and become my fav. I wish he was more in the season.

Liz Taylor, a real icon of our time, y’all. Once a serious business man who would dress in women’s clothes in secret comes to the Hotel Cortez and meets Elizabeth. She tells her it’s okay to be who you are. Liz fully embraces her new identity as a woman. Elizabeth tells her one of my favorite quotes ever, “Goddesses don’t speak in whispers, they scream” and from then on Liz stays in the Hotel Cortez, serving drinks, looks, and full sass. Truly my favorite character of the entire season. And the diversity! Having a transgender character is amazing and showing that acceptance is possible is just so wonderful. Snaps for you AHS! And we bow down to you, Liz, keep slaying the game.

So, there you have it! Those are my top 10 American Horror Story characters throughout all the seasons. Who are some of your favorite characters? Have you watched the new season premiere yet? Let me know what you think in the comments below! Thanks for reading!