Here’s something for those of us already missing Halloween…

The preview told me exactly what to expect: ridiculous, bloody fun. So grab your popcorn, Geeks, while I take a stab at this Netflix gem.

If you couldn’t tell by the trailer, The Babysitter follows 12-year-old Cole (Judah Lewis) in a fight for his life against his babysitter and her satanic cult. 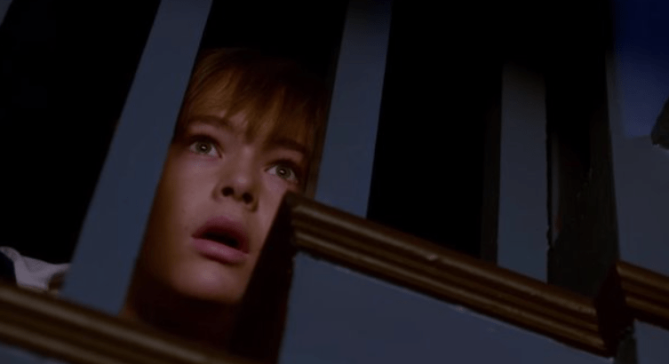 Though Lewis is sure to be a heartthrob in a few years, poor Cole is your average, dorky middle schooler, Bully’s torment him daily, and he’s afraid of pretty much everything. The few joys in his life are aerodynamics, his best friend Melanie (Emily Alyn Lind), and Bee (Samara Weaving), the babysitter he’s too old to still have. Bee is the epitome of the cool chick– she quotes westerns, knows her sci-fi, and treats everyone as if they’re the most interesting person in the world. And did I mention her smokin’ bod and gigantic, anime eyes? So, it’s understandable when Cole stays up past bedtime to see if the babysitter is inviting boys over to make out. To his delight, she’s invited a group of hot high schoolers to play truth or dare, but that’s when the night takes a turn.

WARNING: Spoilers ahead, if you didn’t watch the preview.

Surprise! Bee stabs the nerdy guy in the head and tells the others it’s time to go upstairs and collect the blood of the innocent. Poor Cole spends the rest of the night hiding, running, and often-accidentally murdering the a-holes that want his blood.

I give it 3 shields, for well-executed ridiculousness and high entertainment value.

A parting warning: don’t watch this one with the kids. Though the main protagonist is a 12-year-old boy, this gore and humor of this film are directly aimed at adults.

Have you watched The Babysitter? Let us know what you thought in the comments.