It’s the end of summer, and while a few shows are still airing new episodes, a lot of our favorites are on hiatus until the fall. Here are a few of the best options to tide you over until then.

Ted Danson and Kristen Bell star in this hilarious afterlife comedy about Eleanor (Bell), a woman who by some error ended up in the “Good Place” after her death, though she definitely deserves to be in the “Bad Place”. In the Good Place, your cusswords are replaced with cleaner versions automatically, and you can eat all the FroYo your unbeating heart desires. In order to keep the Good Place’s architect, Michael (Danson) from figuring out his mistake and sending her to the Bad Place, Eleanor’s would-be soul mate, Chidi (William Jackson Harper) teachers her how to be a good person in this comedy of errors.

Especially fun to watch are the unknowingly-narcissistic Tahani (Jameela Jamil), the sweet but simple Jianyu (Manny Jacinto), and the robotic info unit Janet (D’Arcy Carden). Everyone in the afterlife is completely nuts, especially Eleanor, making for good, quality entertainment.

Season 2 Premieres September 20th on NBC. For now, watch it on Netflix.

Ozzie (Wyatt Cenac), a journalist, is interviewing an alien abduction support group in Beacon, New York, when he realizes they might not be as crazy as he first thought. To say more would give away too much.

Recently TBS has really upped their game. I’ve enjoyed all of their new comedy offerings, like The Detour, and even the darker-toned Search Party, but People of Earth is the best of the bunch.

Season 2 is airing now on TBS. Otherwise, watch on demand with Direct TV or download from iTunes or Amazon.

Holden (Burkely Duffield) wakes from a 12-year coma with powers he doesn’t understand, memories of a world that can’t be real, and immediately on the run from the various people who want to use his powers for both good and evil.

Beyond is a fun, trippy little show, though Freeform doesn’t try as hard as CW to perfect their offerings (It’s also a less-dark version of The OA, which I mention below). Despite a little cheese, some mediocre scripting and acting, I love following Holden’s story. He’s a kid in an adult’s body at times, and mature beyond his years at others. Duffield portrays this well with his lost puppy look, but the supporting cast (especially Holden’s younger brother, Luke (Jonathan Whitesell, the 100); and his once-tormenter-now-friend, Jeff (Jeff Pierre, War Dogs)) help round out Holden’s lostness. Unfortunately, I haven’t found a solid ship in this show yet, being as both love interests (Wills, played by Dilan Gwyn and Charlie, played by Eden Brolin) fall a little flat for me so far. Luckily, the weirdness of the story is enough to keep me from caring.

Beyond, Season 2 airs on Freeform sometime in Early 2018, but watch season 1 in it’s entirety on the Freeform app now.

Freeform and their terrible, guilty pleasures…

Clary (Katherine McNamara) is a normal 18-year-old girl who discovers she’s part of a long line of shadowhunters, a secret society of human-angel hybrids who hunt demons and any other monsters that threaten humanity.

Shadowhunters realizes Cassandra Clare’s The Mortal Instruments novels to near-perfect accuracy. My only grievance is that they’ve only hinted at the characters from her Steampunkish The Infernal Devices series (a better story than The Mortal Instruments in my opinion). Okay, I lied; that isn’t my only grievance. The acting is meh, and the writing even moreso, but they make up for it with lots of sexiness and action. Where else can you find a gay, asian warlock and hispanic shadowhunter couple who simultaneously kicks ass and looks fabulous doing it? Plus, the may-be-siblings pair of Clary and Jace is fun to watch, especially when they throw in the vampire-nerd-bestie, Simon and the mysterious shadowhunter, Sebastian. It’s a hot, soapy mess, emphasis on the “hot”.

Shadowhunters Season 2 is currently airing on Freeform. Stream it on Netflix.

When Amy (Cara Theobold, Downton Abbey) goes off her meds, the visions she had as child return immediately. But this time, she’s not alone. Wacky Raquel (Susie Wokoma, Chewing Gum) can see them too– the true faces of demons possessing human bodies. Together, they fight the monsters with a group of companions that one-by-one drop like flies. No friend is safe! But as long as they have each other and some animal onesie pajamas, these two crazy chicks just might come out alright.

With only one season comprised of six, 45-minute episodes, you could finish this series in a night. It’s so great, you might want to.

Find this comedy-horror on Netflix.

If Beyond was executed with the same perfection as The OA, they’d almost be the same show.

Brit Marling co-created and stars as Prairie, a girl who suddenly reappears after missing for seven years. But the real kicker is that she was blind when she left, and now she can see. Secrets unfold slowly in this mind-f**k of a show, but I found it hard to turn off, even for important things like sleeping and spending time with my family. Prairie recruits an odd group of misfits to listen as she weaves a mysterious tale of resurrection, kidnapping, and the scientific exploration of near death experiences. Her rapt audience is simultaneously skeptical and captivated by her, as you will be. Be prepared for an open ending with the promise of a season 2 sometime in the future. And for something really out there, check @the_oa on Instagram for mysterious images that tie in to the show.

Watch The OA season one on Netflix. Season two TBA. 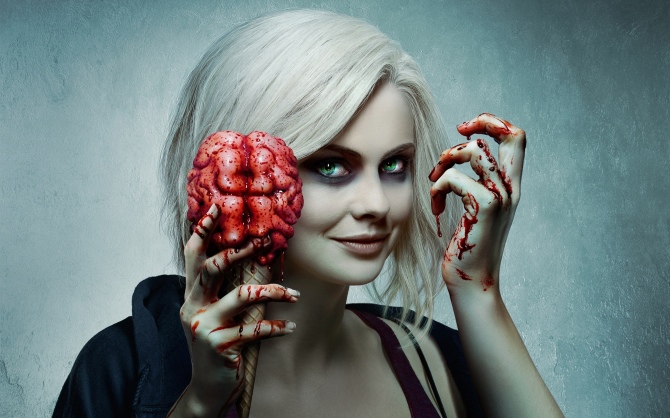 iZombie follows Liv Moore (Rose McIver, Once Upon a Time) after a boat party turns into a zombie feast, and she ends up undead. Forced to eat brains to stay coherent and not go “Full Romero”, Liv gives up her fiance, Major (Robert Buckley, One Tree Hill), her family, and a career as a doctor to be a coroner, where she has access to all the brains she can eat. A side effect to eating brains is taking on the person’s personality and getting flashbacks of their life leading up to their death. Soon, she partners up with Detective Babineaux (Malcolm Goodwin, American Gangster) to help him solve crimes with her “psychic” abilities. 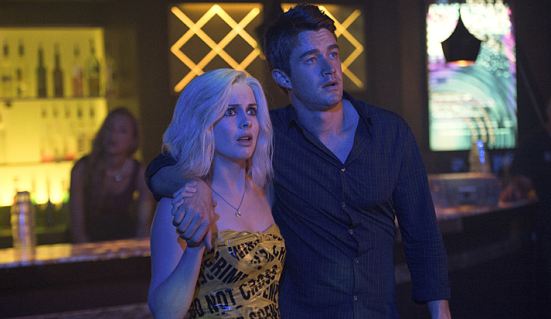 One part horror, one part whodunnit, and two parts comedy, iZombie is one of those shows that’s hard to classify. And don’t get me started on the eye candy! In classic CW fashion, everyone on the show is pretty.

Season 4 returns to CW sometime in 2018, but binge the first 3 seasons on Netflix now.

Lucifer (Tom Ellis, Rush), bored with life in Hell, vacations in LA, where he owns a nightclub called LUX. When he witnesses a friend gunned down outside, he helps the LAPD solve the crime making people reveal their darkest desire. He enjoys the experience so much, he decides to become a full-time consultant, partnering with the gorgeous, but immune-to-his-charms, Detective Decker (Lauren German, Hawaii Five-O).

This show is especially fun because of Ellis’s zany, horn-dog portrayal of the big bad, cast against the no-nonsense Detective, but the supporting cast is equally entertaining. The violent demon Mazikeen (Lesley-Ann Brandt, Spartacus); the vengeful angel Amenadiel (D. B. Woodside, 24); Lucifer’s therapist and lover, Linda (Rachael Harris, the Hangover); and Chloe’s ex-husband and fellow Detective Dan “the douche” (Kevin Alejandro, Once Upon a Time) all add comedy and depth of the show.

I love Supergirl (Melissa Benoist, Glee) SOOOOOO much, especially now that she’s moved to the CW and the crossovers with the Arrowverse keep on coming. Sure, she wears a skirt, but she’s no over-sexualized, comic-book fantasy version of the perfect woman. She’s an alien, but loves humanity to a fault, even when the people inevitably turn against her. It’s so refreshing to see a sweet, but relatable female character taking center stage onscreen.

*Spoiler Alert* Supergirl’s relationship with Mon-el (Chris Wood, Containment) shows that girls can be strong yet love flawed men. The couple butts heads on almost everything, but always with respect and deep affection for one another, strengthening my ship for these two. So much so, that I threw my remote at the screen at the end of season 2. If you’ve seen it, you know what I’m talking about, otherwise, that’s something I refuse to completely spoil for you.

Episodes return to CW on October 9th. Binge the rest on Netflix now. 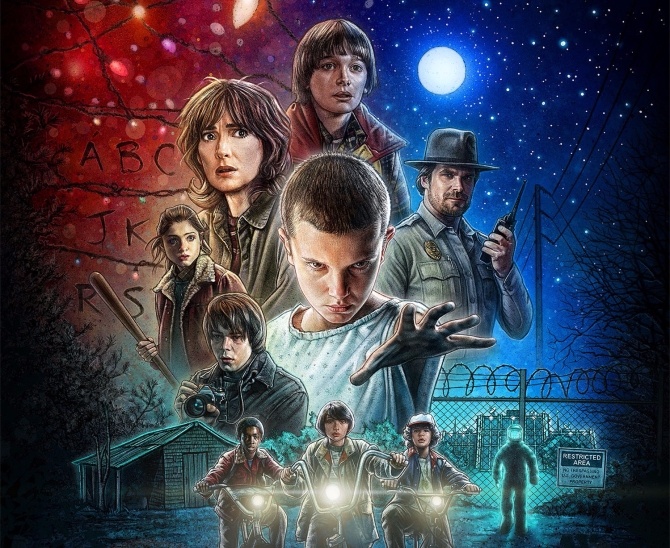 A boy goes missing, his friends and mother will do anything to find him, and less than a mile away, the government does secret tests exploring the supernatural. I won’t spoil it further because you need to see it to appreciate it as it unfolds.

For good reason, Stranger Things is the crowning glory of the Netflix originals. The Duffer Brothers do a damn good job of capturing the 80’s for all of us nostalgic geeks. Not only that, they tell a damn good story.

Have you binged any of these shows? Did your favorite make my list? Let me know in the comments.