Recently, I hit a show hole on Netflix. I decided to try one of the series Netflix had recommended for me, but that I’d left sitting on my list for weeks without bothering to touch. After devouring all three seasons of the show, I was angry. I was incensed and enraged because… WHY DIDN’T ANYONE TELL ME ABOUT THIS AMAZING-ASS SHOW?!?!

I honestly don’t know how I went three years without knowing about Penny Dreadful. I don’t understand how this show did not ping my radar. It’s dark, beautiful, and Gothic… just how I like things. It has witches, vampires, werewolves, demons, Frankenstein with his monster, and Dorian Gray. Seriously… How in the HELL did I not know to watch this show?! Whatever. The past is passed and cannot be changed. Netflix, ever faithful, filled the hole I didn’t realize my life had and recommended the series to me. And here we are. I now have a new TV love of my life (I have so many, you know).

It’s difficult to succinctly summarize this show. To start, it’s about a man and woman trying to rescue his daughter (her best friend) from the clutches of an evil force. But it’s really only about that for maybe the first episode of the series. After that, it becomes a show about a hundred different things. But foremost, it’s about several damaged individuals, each trying–and mostly failing–to find redemption, make the right choices, and be good people.

The show’s story lines are convoluted and somewhat all over the place. But in viewing the episodes, I just didn’t care. The draw of the show is not the story, but the characters. Each of them is utterly fascinating. They are all likable. They seem kind and good and earnest. Each one is doing what they can to make the world better. They are each attempting to overcome what they believe are the demons of the world, whether in their mind those demons are internal, actual beings from Hell, death, or the loss of beauty in the natural process of aging.

They are all doing what they think is right. And for that, I found myself rooting for them. However, as time passed and secrets were revealed, the view of each character became more complex. Each one was actually pretty terrible. Each one had done horrible, horrible things. They had all made mistakes, or bad choices, or acts of utter hubris that brought suffering, destruction, or death to the innocent around them. 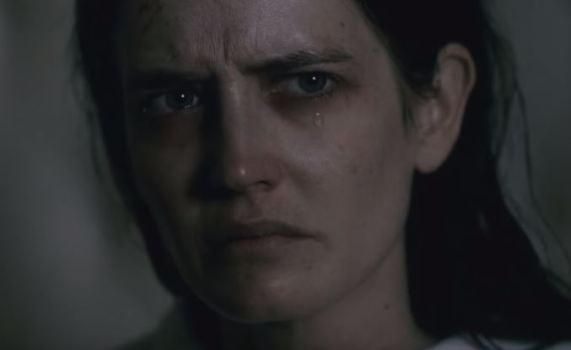 But then, each dark history was further exposed to light. And suddenly, I understood why they had done those horrible things. They still weren’t right, and likely not even justified, but they were understandable. Suddenly, horror was replaced with pity and sympathy. But right after that, the characters would do something fairly terrible again, make a clearly wrong choice, and I’d lose track of how I felt about each of them because it seemed to change from scene to scene, from moment to moment.

I found that I couldn’t keep up with my own emotions in regard to the characters on this show. Because each character was so complex, my feelings toward each one of them became just as complex. I pitied them, judged them, became angry at them, rooted for them, and wanted them stopped. These conflicting emotions didn’t even happen sequentially. They happened simultaneously. I became angry at Vanessa while I hoped for her victory. I pitied Frankenstein’s monster while being repelled by his actions. I wanted Ethan to have love while believing he should probably leave the ladies alone. Later, I would be angry at him for doing just that. I felt sorry for Dorian while judging his behavior. The list goes on and on. The complexity of this show’s characters created a complex emotional experience for me as a viewer. And that made for one amazing ride.

If your tastes run as mine do toward the supernatural and the macabre, I think this show is likely for you. If you like to watch stories of night creatures, the things that bump in your nightmares, monsters with sharp teeth that like to eat little children and make playthings of their bones… you should definitely watch Penny Dreadful. It is just such a story and has the added bonus of being beautiful to look at as well as smart, challenging, and emotional. If you’re not a fan of dark tales where vampires don’t sparkle, the devil is more than a Sunday School story, and it’s often hard to tell the difference between the good guys and the bad, I still recommend this show. It’s just that good.

Penny Dreadful is a story told in three seasons. The final episode ends beautifully with two simple words: The End. And as a viewer, there is a feeling of satisfaction and completion. In a world where too many shows overstay their welcome and drag themselves into poor storytelling and recycled plot in order to keep raking in a buck, it’s nice to have a show so neatly packaged as this. All episodes of the series are currently available to stream on Netflix as well as the Showbox app (which is found online, but not in your local app store). If you haven’t yet watched Penny Dreadful, I highly recommend you do so. Just make sure any little ones are in bed and firmly asleep before you begin. The series aired on Showtime and it has the vulgar language and blatant nudity to prove it. 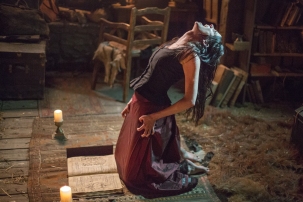 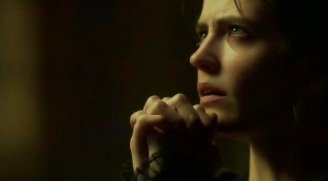 Have you watched ‘Penny Dreadful’? Who was your favorite character? Why? Do you enjoy the supernatural and the macabre? What’s your favorite supernatural show? And did you have to read ‘Frankenstein’ or ‘Picture of Dorian Gray’ in school? If so, did you like them? Why or why not? Please share your thoughts in the comments.

2 thoughts on “The Beauty of Complex Characters: Penny Dreadful”