On Wednesday, Starz announced that the cable network had renewed Outlander for seasons 3 and 4, a two-season renewal that speaks to the popularity of this adaptation of Diana Gabaldon’s series. These two seasons should cover the books Voyager and Drums of Autumn, which is amazing news for Sassenachs everywhere, especially after we see what I suspect will be in this season’s last episode.

Additionally, Starz will be running a marathon of season two’s twelve episodes over the Fourth of July weekend, leading up to the season finale the following Saturday, July 9th.

This week’s episode “Je Suis Prest” continued the march toward the season’s end and the now inevitable clash between the Scottish forces rallying around Prince Charles Edward Stuart and his effort to restore his father King James to the throne of British and the British themselves, who now consider anyone involved with the Rising traitors and have begun to muster troops as well. We also learn a little more about Claire and her experiences with World War II this week, a welcome glimpse into the psyche of our main character.

Jamie and Claire are on their way to meet Murtagh and the men from Lallybroch after leaving Beaufort Castle and Lord Lovat with the few men that Simon Fraser had managed to rouse before their departure. Upon arriving in Crieff, Jamie must start training these men to meet up with the rest of the Bonnie Prince’s forces and prepare the whole army for confronting the British. Jamie and Murtagh go to work drilling these men, who are mostly cottars and tacksmen and have never wielded a weapon, let alone fought in a battle. Charged by the BPC to bring in forces from Clan Fraser, Jamie leads the training despite the efforts of his uncle Dougal Mackenzie to insert himself into the fray.

That’s right, Dougal’s back and no one’s too thrilled to see him. Sure, Angus and Rupert are always welcome comic relief, but Dougal didn’t help when Jamie was in Wentworth and tried to get his hands on Lallybroch through his agreement to marry Claire if Jamie were to die. His style of fighting, as evidenced by his Highland charge while the men are drilling, isn’t jibing with Jamie’s knowledge of modern military techniques and Jamie does what he can to keep Dougal at bay while trying to train his men. The goal is to turn the men into something akin to what they’ll face from the British, which Jamie desperately tries to do through scenes familiar to modern soldiers, with the men learning to march in formation, fire a weapon, and fight hand-to-hand with swords and knives. 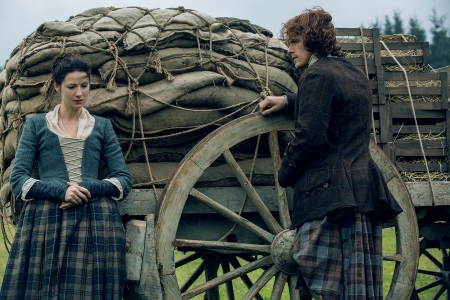 In between all of this, Jamie observes Claire’s day-to-day attitude shift from her usual good spirits to despondency and back. Intermittent through all of the drills and scenes of army camp life are flashbacks (or flash-forwards?) of her experience with two American servicemen who had become separated from their unit. She meets them, watches them play baseball with the Brits in her camp, and then rides with them on a late-night trip to reunite them with their unit; the jeep that they’re all riding is attacked and blown off the road. Claire lies there while the two soldiers die, trying desperately to ignore the sounds of the dying men despite her instinct to help them. She explains all of this to Jamie, who offers to send her back to Lallybroch for the duration of the conflict. “You’ve fought your war. We’ll fight this one without you,” Jamie says.

Claire knows – as do we – that she can’t leave. If she does, we won’t be privy to the action since all of this is from Claire’s point of view. “I can’t be helpless and alone ever again,” she says. She won’t leave Jamie and the people she knows and cares about while they’re all in danger. Jamie promises that she won’t ever be alone again and all of the book-reading Sassenachs sob a little inside.

The highlight of the episode, though, is the moment when a British teenager sneaks into the camp and tries to kill Jamie, “Red Jamie” as the boy calls him. Jamie pretends to threaten to violate Claire, an English lady, if the boy doesn’t reveal where his companions are. The young man, William Grey, second son of Viscount Melton, reveals that 200 British infantry are nearby, with sixteen cannons and 30 cavalry as well, all traveling to meet up with General Cope. The men take young Grey with them to see if his information is true and leave him tied to a tree about a mile from his British compatriots, sparing the boy’s life. “I owe you my life,” the boy says. “A Grey does not forget an obligation, sir.” Don’t forget this moment, Sassenachs; it will come around again in season three, especially now that we know there will be a season three.

Jamie takes the information and a handful of men and, under the cover of darkness, undertakes a commando raid to steal the wheels and cotter pins from the sixteen cannon. He shows Claire the fruit of their labors and then moves his men on to meet up with the BPC’s forces, all gathered and ready to fight.

“No Turning Back Now”

Claire’s traumatic experience with the GIs is not in the book, something which a number of people have pointed out. Sure, this is a departure from Dragonfly in Amber; Gabaldon shares Claire’s experiences in other parts of her life in drips and drops throughout the books. No doubt, she imagined that Claire must have had a number of moments like that while working at a battlefield hospital in France. These flashbacks don’t detract from the story at all, but add a dimension to the story that isn’t given in the book. Claire stays with Jamie and his men not just as his wife and a healer, but also because she understands what’s at stake and she’s been there. She knows what they’re facing and, rather than supporting from afar, she’s supporting from within. We can see why she stubbornly clings to him and his side throughout the hardships of the campaign. Sure, she doesn’t want to be alone, but she also doesn’t want him to be alone either.

Resplendent among the preparations for the campaign here in this episode is an underlying feeling of futility. Jamie knows that they cannot stop things now so why not join the fight and support their efforts? Nevertheless, despite Jamie’s own efforts, the action has a vaguely fruitless air about it. The men are trying, but so much seems to be against them. Jamie Fraser in this episode has everything that we love about him: he takes charge; he loves Claire; he stands tall against Dougal; he is canny and cool in his fight. In all of this, though, Jamie is the most sure thing, the strongest and the most vital, and we know that can’t last. That feeling of futility matched with Jamie at the tallest thing around can only mean that the fall is coming and it’s going to be huge. It’s going to be heartbreaking. We’re on the downward slope toward the end, Sassenachs, and I hope you all are prepared.

Here is Starz’s preview for next week’s episode, Prestonpans. This is the first battle between the Scots fighting for the BPC and the British who are there to stop them.