Good storytelling is more about showing than telling. Storytelling in a visual medium like television is all about showing; you can do some telling, but the audience will tire of that quickly and will want to see the action. The question then becomes: how much can you show before your viewers have had enough? Where is the balance between showing enough to tell the story and telling your audience too much in lieu of the story?

Therein lies the challenge of Outlander the television series: takes these tomes and their masterful storytelling, reduce them down to their essential parts, and then show those essentials in a way that encapsulates the written story. In the first season, the most challenging episodes happened to be Jamie’s and Claire’s wedding and the bonding that took place over their wedding night and the rape and torture Jamie faces at the hands of Black Jack Randall at Wentworth Prison. Both episodes were gut-wrenching in different ways, but each left an indelible impression on their viewers, book readers or no, and garnered attention from outside the Sassenach fandom that the show deserves for so many reasons. 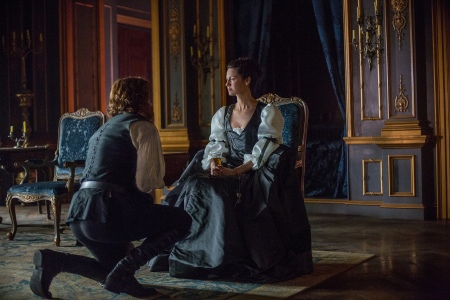 With season two, book readers knew that yet another moment in Dragonfly in Amber would test the Outlander crew in front of and behind the camera. This moment came in episode seven, titled “Faith.” They as the cast and crew had to have faith in themselves that they could tell this story in a way that is true to the scope of that moment. We as the viewers had to have faith in them as well. I can say that our faith in them and theirs in themselves make “Faith” one of the best episodes of the entire series to this point.

(Spoiler Alert: if you have yet to watch this newest episode, please stop reading here. “Faith” deals with a sensitive topic – the loss of a child – and those who might have dealt with similar situations may feel distress at viewing this episode. The following synopsis will outside how this unfolds in the episode and I wanted to give a heads-up to all readers just in case.) 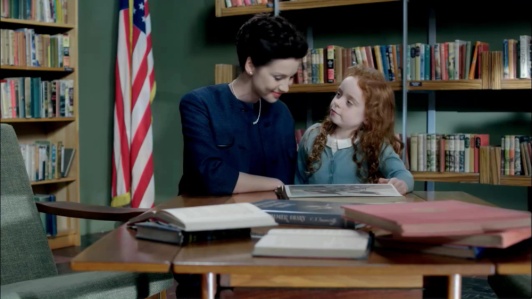 Her Name Was Faith

At the end of the previous episode, Claire collapses after witnessing the duel between Jamie and Black Jack Randall. She implores Magnus, Jamie’s manservant, to take her to Mother Hildegarde at L’Hopital des Anges and that’s what he does. Yet the episode opens in a different time and place: Boston 1954. Claire and a red-haired daughter. When Claire returns to Frank in 1948, she is pregnant with Jamie’s child. No doubt this is that child, but this is not the baby that she is pregnant with when Magnus hurries her to Mother Hildegarde. As Claire goes in and out of consciousness, we see Monsieur Forez, the King’s executioner and amateur medical practitioner alongside Claire at L’Hopital, and others tending to Claire. When she awakens, she hysterically discovers the absence of her baby and crumples when Mother Hildegarde tells her the truth: her baby was stillborn and her husband is still out of touch.

Claire’s recovery runs into complications, including an infection that results from the incomplete delivery of her placenta. She lies fevered and dying, her child gone and her husband in the Bastille because he was caught dueling, which is outlawed by royal decree. Late one night, a cloaked figure sneaks into L’Hopital: it is Master Raymond, who seeks to heal Claire of the infection that is ravaging her body. His touch is healing and he helps Claire to deliver the remaining placenta is festering in her womb. He disappears, but not before telling her that he called her ‘Madonna’ not because she was with child, but because of her blue aura, so much like the Virgin Mary’s cloak. Her fever breaks and she knows she will recover, a miracle according to the sisters of L’Hopital, but Claire knows better. These were the things that we do for our friends, much as she had warned him about the king’s desire to root out those who practiced the dark arts.

Claire returns home to no Jamie and finds that Fergus is still upset by his role in Jamie’s arrest. When they were at Maison Elise, taking care of Prince Charles’ debts, Fergus entered one of the rooms and attempted to steal some perfume. The room he enters was that of Black Jack Randall, who catches Fergus in the act. Expecting someone else, BJR decides that Fergus will do for his pleasures and assaults Jamie’s young charge. Fergus cries out during the rape and Jamie runs in to see what is happening. Upon seeing that it’s BJR assaulting Fergus, Jamie throws BJR to the ground and lays into him, but is immediately pulled off by others. Jamie challenges Black Jack to a duel and now Claire understands why Jamie went back on his word to wait a year. Fergus feels responsible for what has happened to Jamie and Claire tries to assure him that nothing – the assault, Jamie’s arrest, Claire’s miscarriage – is his fault.

Despite her anger at Jamie, Claire attempts to petition for his release. Mother Hildegarde facilitates a meeting with Le Roi Louis XV, but warns Claire that Louis will expect payment. Claire’s visit to Louis becomes a trial where Le Roi asks La Dame Blanche, as he presumes Claire is, to judge two men accused of practicing the perversion of the quest for knowledge, i.e., the dark arts. The two men: Master Raymond and Le Comte St. Germain. Though St. Germain has become her enemy, she does her best to avoid condemning him to death. Her efforts, though, fail. She offers a potion for each man to drink to show their guilt or innocence. If they survive, she asks Louis to set them free. Master Raymond drinks first and is momentarily ill, but it passes; Claire had given him bitter cascara, knowing it would look like he survives something deadly. But Master Raymond has poisoned the cup after he drank of it and Le Comte drinks, knowing that it has poison but having no other choice. He dies, much to Claire’s chagrin; she never wanted this even though Le Comte had admitted to poisoning her himself. Louis tells Master Raymond to leave France immediately and then grants Claire Jamie’s freedom and a pardon so that they may return to England, but only after he has the briefest sex ever with her.

Jamie returns home to find Claire with no baby and she recounts what happened. She talks about their child: her translucent ears, her slanted eyes, her luminous skin. She recounts how she hated him and blamed him, but, after learning about Fergus’ experience, blames herself for everything. Jamie forgives her and asks her if they may carry the burden of their loss together rather than alone. Claire asks him to take her back to Scotland and he happily agrees.

Show Rather Than Tell

This part of the review is about the time where I start critiquing the writing or the choices to leave some things out or stage some moments a certain way. Such criticisms are unnecessary here. Everything comes together here to create a moment that is meant to stick with you as it sticks with Jamie and Claire. Every relationship has those moments that define its trajectory; sometimes they are moments of happiness, but, like life, loss is part of it as well. Loss can take so many forms, but the loss of a child produces emotions so intense as to define the entirety of a life. Everything that happens between Jamie and Claire from here on out has its definition in this moment. The loss is palpable on Balfe’s face over the many moments where the enormity of it overwhelms here. It cascades across Sam Heughan’s face as well, but Balfe’s performance is masterful. As a mother of two, the performance she imbues into Claire’s words and emotions and actions that are entirely relatable if I put myself in Claire’s shoes. It is a masterful performance born of both an actress who is demonstrating in each scene why she was the right choice for this role and a writer who understands her source material in a loving and appreciative way. 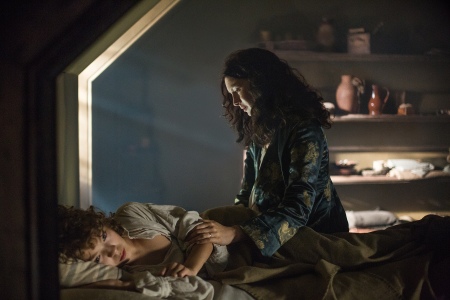 I cannot accurately tell you what this episode does right without feeling like I will never be able to do it right. Rather, instead, I would prefer to show it to you. Watch this episode with a large box of tissues, and, if you’re so inclined, a stiff drink. You’re going to need them.

Claire and Jamie return to Scotland in episode eight, “The Fox’s Lair,” as Prince Charles ramps up his efforts to mount a claim to the English throne. Here is Starz’s preview:

Here is the Australian preview for episode eight: