Another week, another episode of Outlander; the only downside to knowing that another episode follows next Saturday is that, eventually, we all will run out of episodes and still no word on a third season from Starz. Alas, we shall make do with obsessively going over each episode of this season and discovering new little tidbits upon each viewing. Let’s make that this week’s theme then: discovery.

A Time of Discoveries

This week’s episode has a number of discoveries within its minutes. Claire discovers that the business of stopping a rebellion means that her husband is absent for long stretches of days; it also means that her tasks in terms of changing the future include teas with the ladies and running a large household, neither of which are undertakings she has any particular desire to do. “Well, I am an unusual lady,” Claire says to Master Raymond, “or, at least, I used to be.” Her tristement leads Master Raymond to suggest that she volunteer at L’Hopital des Anges, a charity hospital. Claire finds purpose there, and she relishes returning to something so familiar and comforting. She has rediscovered that part of her, if you will, but Jamie seems none too thrilled with her nursing such patients in her present state. They argue over her need to be useful and his need for her to support him in this difficult endeavor.

Dissatisfied with the state of things, Jamie returns to Maison Elise, where he discovers the young servant boy working that evening is a pickpocket. A wee confrontation between the two, upon which Jamie discovers just how good a pickpocket the young man is, leads to a new face joining the Frasers in Paris, Claudel, better known as wee Fergus. Jamie uses the lad to steal letters to Prince Charles to copy and then discovers that many are written in code, which he and Murtagh endeavor to decipher. One particularly difficult letter, disguised as a piece of sheet music, leads them to Mother Hildegard, the matron of L’Hopital des Anges, who also happens to be a musical prodigy that’s friends with *namedrop* Johann Sebastian Bach. With her help, they discover that the Englishman communicating with Charles is none other than the Duke of Sandringham. *cue dramatic music* 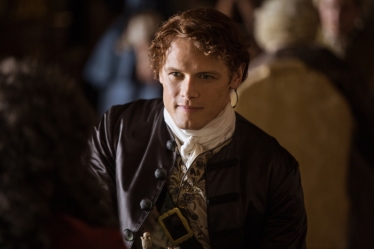 Jamie wants to bring the Duke over to feel him out. Claire and Murtagh, to whom Claire has confided that Black Jack Randall still lives, damn him, exchange looks of unease at this prospect because they know that Jamie needs to know that BJR still lives before Alexander Randall and the Duke arrive and tell Jamie themselves. Potentially in front of all of their guests, including the Bonnie Prince himself. Yikes.

Oh, yeah, BTW, Claire also figures out that Mary Hawkins is not just a name she’s heard in passing. No, no, she’s Frank’s freaking six-times great-grandmother. As Frank is a direct descendant of BJR, then the damnable lout needs to live long enough to impregnate Mary Hawkins so that Frank eventually can exist for Claire to marry and then leave behind. And then return to. And raise a child with. Oy.

Things We Discovered This Time

Whew, so for an episode where no swords were drawn and no one got laid (except Murtagh), quite a bit of excitement happened nevertheless. First, I have to applaud the casting people behind this show. They have shown time and again to be spot on in their vision for who these characters are and, sadly, my imagination has never been quite as good as theirs. Frances de la Tour, who played the headmistress Madame Maxime of Beauxbatons in the Harry Potter films, as Mother Hildegarde is spot on. She exudes the same force of personality Gabaldon imbues in her in the book Dragonfly in Amber and, with Bouton, the diagnosing dog, shows why Claire values her time at L’Hopital des Anges so much. They are similarly independent, curious, and smart in a time when women were so limited in their roles. The young man tapped to play wee Fergus, Romann Berrux, brought a face to that character that I had yet to solidify in my mind. I look forward to seeing more of him with Sam Heughan as I envision they will play off of each other well in the coming action of this second season. 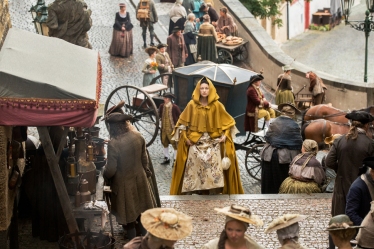 What else did we discover? As I have read the books more than once, I know what’s coming, but I am struck each time I watch these episodes that Ron Moore and company have brought over from Gabaldon’s source material a very important characteristic: nothing, not even the smallest detail, is insignificant. The books, for all their imposing expansiveness, rarely include a detail or a moment or a character that is disposable. The show has continued this, which makes this among the more thorough and well-executed of adaptations that I have seen. Gabaldon herself will tell you to put the books down and treat the show as a separate entity; rightly so, for that is, but what makes it worth the viewer’s time is not just the lush costuming or the spot-on casting. It’s the fact that it stays as true to the story as is necessary to tell it. As a viewer, note each moment, each remark, each name that comes up. That diligence will pay off, I promise you. 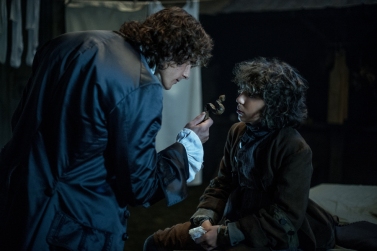 Though light on action, this week’s episode brought to light significant pieces of information that continue to setup the major conflicts that will carry us through the rest of the season. Looming in the background, of course, is the Jacobite rebellion, but others, such as Black Jack Randall and Jamie’s inevitable desire for revenge, are presaged here as well. The humor was diminished and the anguish heightened as we watch Claire and Jamie continue to butt heads, especially with Jamie still dealing with the aftermath of his trauma, but, overall, this week’s script and storytelling was better than last’s. I still don’t think this is the best episode of the season, but it should shape up to be one of the better ones.