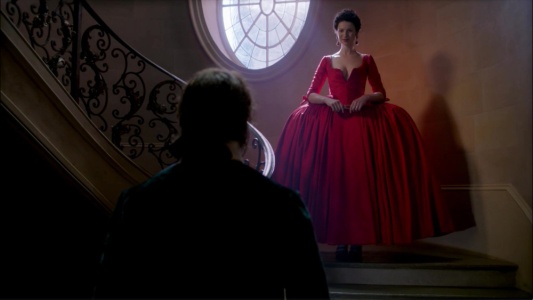 When I was teaching college literature, I would often include a play with a film adaptation in the syllabus. I wanted to give my students a chance to view the material through a lens other than their own. We would talk about the interpretation of stage directions or details about sets and costumes and the like. I wanted them to see how putting on a play was an interpretation in itself; it was whatever the persons staging the play had imagined would be the best way to tell the story. Every time I watch an adaptation, everything from Harry Potter to Twilight to Outlander, I bear in mind that idea: that the text itself is a thing and the visual version of it, whether it’s on stage or film, is a separate thing. In the end, it all comes down to who is doing the interpreting: the reader or the producer. This idea becomes all the more imperative when watching this newest episode of Outlander, Episode 2.02 – “Not in Scotland Anymore.”

The episode starts off on an odd note: a sexy moment between Jamie and Claire, replete with soft focus and lots of breathy grunts and moans, turns nightmarish for Jamie, with Claire’s face replaced with that of Black Jack Randall. The fun turns into fury  and Jamie is suddenly (and almost cartoonishly) covered in blood as he stabs Randall repeatedly and then wakes up in a cold sweat. If you need a theme for this episode, let’s use this moment as an example; this week’s theme is ‘let’s catch you up, shall we?’ What the television show lacks is the luxury of time; for book readers, this episode is frustrating because it feels like so many moments are condensed down into smaller chunks, lacking the details that make them memorable to us. For viewers, however, this episode is an absolute necessity. Why? Let’s take a step back to the first episode for a moment. 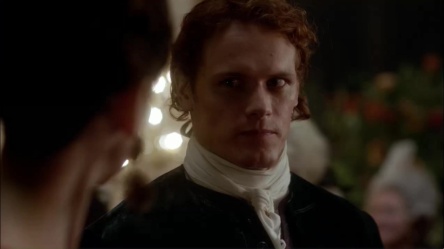 Episode 2.01 creates the frame story of Dragonfly in Amber, retaining the structure of that novel with a few changes, but still establishing important moments, such as Claire’s return to the 20th century and Jamie and Claire’s arrival in France plus the introduction of Jared Fraser and the Comte St. Germain. All 2.02 does is continue that setup; without an episode like this, the action going forward would be piecemeal and the exposition absent. Think of this as the catalyst for the second season. In this episode, a number of major conflicts arise, but, unless you have been here before (i.e., read the book itself), you might be looking at this as too slow and too inconsistent, a la Episode 1.14 – “The Search.” You would be right about the inconsistency, as it felt like the episode bounced around too much, from Jamie’s nightmare to introducing new characters to comedic moments to the BIG revelation at the end. Even though I know what’s going on, if I were a viewer, I would have left the episode feeling like much of it was not useful and almost frivolous. However, the nature of the narrative that Gabaldon has created means that nothing is insignificant or frivolous, no matter how inelegant the script for this particular episode is. 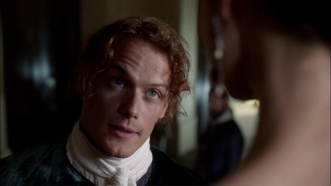 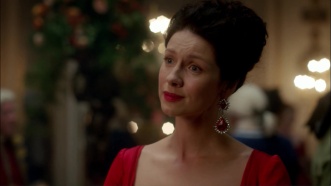 Forget the Honeypots and Look for the Flies

The bloody introduction to this episode seems apropos upon first viewing, as I was left feeling like the story in this first arc of the season had been chopped up enough to be unrecognizable if you were not already familiar with Dragonfly in Amber. Upon a second viewing, however, I started to see the functions of this script, but I’m still burned by the rushed quality of the writing and the emphasis on finding humor in the lives that Jamie and Claire are living in France. I understand the contrast implied by the episode’s title, and, yes, it is clear where the conflicts are going to come from even with the crap dialogue. Yes, Claire dislikes the role she has assumed as running a large household with servants and as a woman of some station with frivolous friends surrounding her. Yes, Jamie is still struggling to find himself amongst the trauma that he has suffered. Yes, as is inevitable in both marriage and television dramas, they will butt heads and the moment with Annalise, though humorous and adorable, foreshadows this. Yes, you will find yourself agreeing with Murtagh that they should just slit the Bonnie Prince’s throat and get the whole show over with. Stick with it, though, and you will be rewarded. This week’s episode may not be the best one of the season, but it heralds the can’t-miss moments to come and I anticipate them all with nauseated glee. 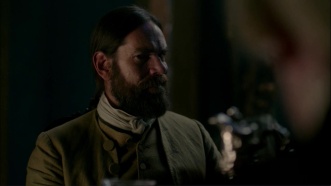 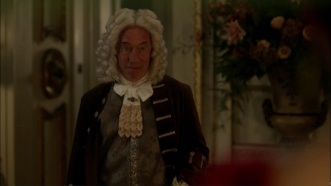 Now that I’ve exhausted the flies, let’s talk about the honeypots or rather Claire’s honeypot, to be precise. My mere existence in social media has exposed me to a number of teeth-gnashers lamenting the honeypot scene following Claire’s visit to Louise de la Tour and her waxing day. Again, see my first paragraph above and remember that this is an adaptation. I’m still smarting from the absence of a line that Claire says when she decides not to go back through the stones and stays with Jamie in season one. In the book, she says “The hot baths nearly won.” It’s a funny moment and illustrative of Claire. It didn’t make it into the show, to which I said “poop” and then moved on. Yes, it would have been nice if the honeypot scene had stayed as Gabaldon wrote it in the book, but it was necessary here to condense a number of moments between Jamie and Claire as they deal with his sexual trauma in the book down to this one moment in the show. They simply do not have the time to give us all of those things we love. Sorry, everybody. Focusing on the changes, though, takes away from the adaptation and the potential wrapped up in it. If one can’t see the forest for the trees, then it is possible to miss something incredible. A crying shame, really. 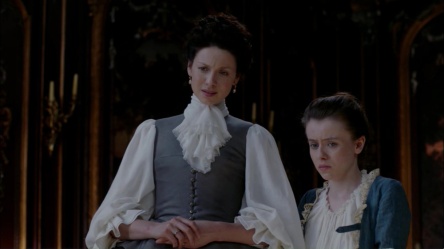 This brings me to the BIG moment of this second episode. As the nefarious Duke of Sandringham returns, he brings with him two sinister things: a coughing assistant who happens to be Alexander Randall, Black Jack Randall’s younger brother who happens to drop the bomb that f***ing BJR is still alive. Cue nauseated look from Claire and the anticipation builds because what the crap are they going to do now, yo? Balfe is magnificent in this moment because I felt her gut punch at that knowledge and I knew it was coming. If you happen to think this whole episode was a waste of time, then surely that moment and the verbal sparring that preceded it was worth the watch. It’s the moment that crystallized for me the whole point of the episode upon a second viewing. This was our collective airplane taxiing on the runway, getting us up to speed for takeoff. Thanks to Alexander Randall’s revelation, I think we’ve taken off. 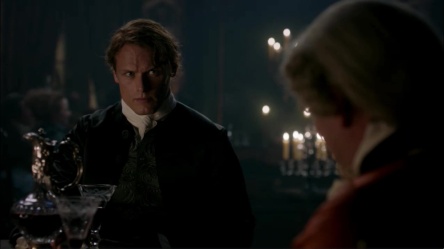 Before We Go, Here’s to a Bigger Fan

Outlander has so many things going for it and this episode continues to highlight those. First, Caitronia Balfe amazes me as Claire. I watch her inhabit this character still, adding grace and humor and steeliness to each performance. I have seen a number of interviews with her and the contrast between the actress and the character is evident; she has imbued Claire with all of the qualities that the part demands and yet she is not Claire when she is out of that setting. I get lost in her performance and I love it. The same goes with Sam Heughan; the two play off of each other as if they were a real couple, exchanging glances laden with meaning, the same unspoken conversations that all married couples have. Heughan disappears into Jamie Fraser unselfconsciously and it is glorious to see him in those settings: flattering the Bonnie Prince, sparring with Murtagh, escorting Claire, etc. Lastly, though, the costuming again tells stories itself. Claire’s red dress and the King’s Mistress’s nipple dress (yep, you read that right) are both iconic images from the books, but, to this point, they were both figments of our imagination. Terry Dresbach and the costumers behind Outlander bring them to life here and the results are the stuff of conversation and rightly should be. 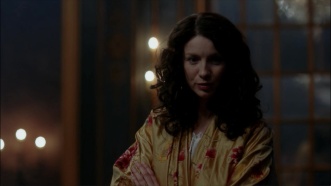 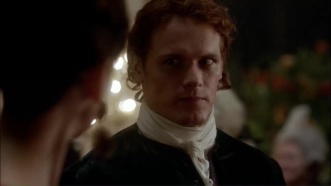 This episode may not seem like one of the more stellar ones Ron Moore and company have given us, but, I assure you, what might have seemed like a slow and meandering story is going somewhere. The end result will be absorbing and gut-wrenching and answer the questions that the opening of episode 2.01 presented us with. Trust me.

What did you think of the red dress? What about the waxing scene? What new character intrigues you the most? What do you think is next for Jamie and Claire?

2 thoughts on “Out of the Honeypot: Thoughts on Outlander 2.02 – Not in Scotland Anymore”