Recently, I hit a show hole on Netflix and decided to go back and binge through something I’d seen before. I chose Season 1 of CW’s The Flash. I love this show and could argue that it is one of the most (if not the most) enjoyable series on TV right now. After going back through the first season, I kept going through Season 2 (not currently available on Netflix) until I caught up to the most current episode. It didn’t matter that I’d seen all these episodes already, even as recently as two weeks ago. The Flash is still a good time. Here are 10 reasons why…

Unlike its predecessor Arrow, The Flash has embraced the lighter, more fun side of superheroism. With jokes, pop culture references, sarcasm, and awkwardness, every episode brings laughter to balance the serious threats and personal trials the hero and his team face. This makes watching The Flash a really fun time and is a huge part of why the show is so successful. I mean, who doesn’t want to have a good time? 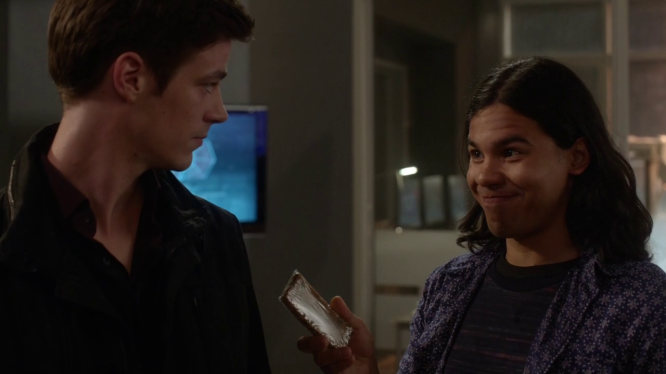 The entire cast of The Flash has amazing chemistry and works together to bring the comedy and lightheartedness I mentioned before. But Cisco Ramon carries a great percentage of that comedic relief all by himself. Played by Carlos Valdes, the character is brilliant, but also really geeky, slightly obtuse, a bit awkward, somewhat sarcastic and quite outspoken. All this combines to make him adorable and hilarious. However, he is not a caricature. The character is dynamic, which means there are many different sides to him. He feels deeply, has profound bouts of sadness and expressive fits of joy, struggles with insecurity and overconfidence, makes mistakes and carries guilt, struggles to balance his cowardice and bravery, and has a history filled with baggage, just like everyone else. This all makes Cisco an immensely entertaining part of the show.

The Flash has time travel. It goes forwards and backwards and crisscrosses over on itself. It creates some unique elements and situations that shows without such elements cannot tackle. It is interesting, if sometimes nonsensical. For example, how can a man be wiped from existence by the death of an ancestor but have everyone still remember him and everything he did still be in place? It’s a paradox, it doesn’t make sense, and it’s never properly addressed. But the show is so much fun that I’m inclined to forgive it and just go with the flow for the sake of my own enjoyment.

I’m a writer. I’ve always been a writer. English and history were where I excelled in school. Math and science were the subjects I struggled and stumbled through just trying not to get a D (my father’s version of an F). So I’m one of those television viewers who can be drawn in and fooled by pseudo-science and imaginary math on TV shows. The Flash puts everything that happens in math and science terms so that impossible things can be explained on a show set in a realistic world. I love that. And since I don’t know much (anything) about complex math and science, I don’t have to think about whether anything the characters say is based in real science or if it’s actually just complete gibberish. I figure it’s most likely the latter, but again, I just don’t care.

In the world of The Flash, the Multiverse theory is proven. Characters cross the divide between universes and viewers get to see a different version of the characters we’ve come to know. The world of the show has been deemed “Earth 1.” During the second season, we’ve gotten to experience “Earth 2,” where the super-villain Zoom currently resides. (I could say it’s where Zoom is from, but I actually (kind of) think it’s not. I feel like he may originally be from another Earth and I theorize that he’s traveling the universes destroying all the speedsters he finds in each one.)  In “Earth 2,” we find a non-Flash Barry married to Iris, who is a cop. Joe is a lounge-singer, Caitlin is meta-human villain, Killer Frost, Ronnie is alive and evil, and Cisco is the bad guy who calls himself Reverb. The Flash’s jaunt into the CBS show, Supergirl, was actually made possible and explained through the Multiverse aspect of the show. And speaking of crossovers… 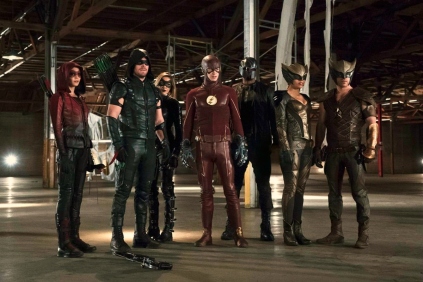 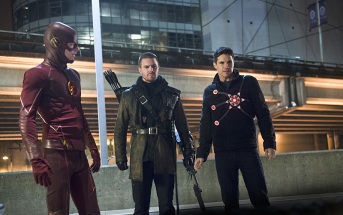 Another part of what keeps The Flash fresh is the show’s connection to other series as well as the characters from those other shows. I’ve already mentioned the one-off crossover with Supergirl earlier this year (which was totally excellent, by the way). Technically, The Flash is a spin-off of Arrow, but unlike many spin-offs, this show keeps very close ties to its sister series. The characters of each appear regularly on the other. And even when the characters don’t show up in person, they are often mentioned and Easter eggs pointing to the other series can be found. Earlier this year, the two shows together spawned yet another series starring a host of characters from their shared universe. The Flash has yet to crossover with that latest show, Legends of Tomorrow, but it is only a matter of time before those characters stop in to visit with their friends in Central City. I can’t wait to see if it will be the future, past, or present for Team Flash when this eventually happens. It’s just one more thing to look forward to in the future of this show. 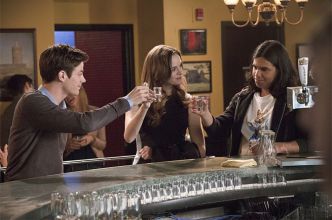 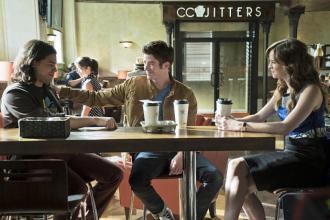 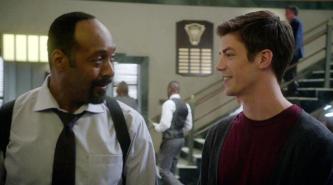 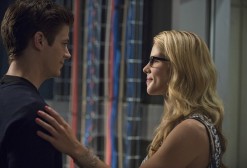 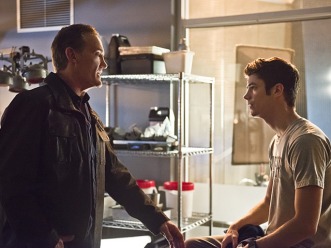 One of the driving forces on The Flash is the relationships between characters. There are romantic connections, for sure. But more importantly, there are friendships and family ties that most often, are not based in blood, but run just as deep. Everyone in Barry Allen’s life is part of Team Flash. It just happens that some of them know it and some of them don’t. But they all, at one point or another, help him to be the hero he needs to be. The love, admiration, and camaraderie between the characters sets a tone for the show that makes it slightly mushy, but mostly wonderful. The characters care about each other and that helps the audience care about them as well. We become invested in the things that happen to them and thus, invested in the show overall. 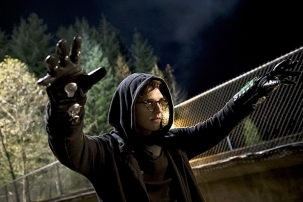 What good is a great hero without excellent villains? The Flash has created some really good and (if we’re being honest) some less-than-great villains to offer opposition to the titular hero. The good outweighs the horrible, however, and most of the bad guys on the show offer interesting challenges for the characters as well as an entertaining time for viewers. What is great about the really good ones is that they are not one-dimensional. They have compelling backstories and sympathetic reasons for why they have become villains. The Pied Piper was disowned by his family for coming out, then felt like he was abandoned by his mentor when another pupil came along. Grodd was tortured  and experimented on until he developed telepathic powers. He’s a giant, genius gorilla with super-powers, but mostly, he’s just lonely. And Leonard Snart is at least half a hero hiding inside the city’s most brilliant thief. These villains and more like them help bring intrigue to the show, give the hero people to battle, and give us viewers more perspectives and more feelings for the bad guy than we may be prepared for.

I am not a connoisseur of special effects. I don’t look at them particularly closely. Basically, I think of them on a pass/fail basis. If the effects are good enough that they enhance the story without making me actively think about them, they pass. If they are so bad that I notice how bad they are, they fail. The effects in The Flash may be not be up to the standard of big budget Hollywood movies, but for me, they get the job done very well. It’s a good thing, too, because there are a lot of effects in each episode. From the hero’s powers to those of the villains to the travel though time and dimensions, there are lots of visual effects happening in the show. They are a key element to the story-telling style of the series. They are also an aspect of the show that I really enjoy. It’s nice to get to watch things you can’t see in real life or any other place on television right now. Weirdly, I actually have a favorite visual effect on this show. It’s when Barry is preparing to make a special effort to run particularly fast and he gets into start position. Just before he takes off and zooms out of frame, lightening streaks across his eyes. It’s a simple thing and it happens quickly, but I find I really enjoy it every single time. 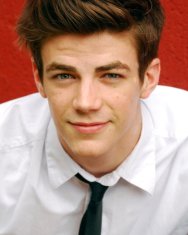 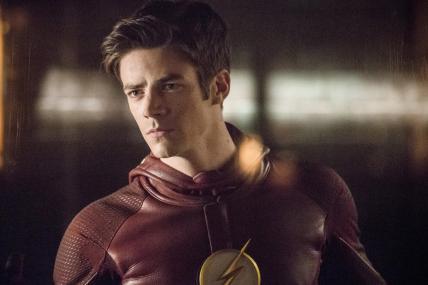 Let’s talk for just a minute about the steaming cup of adorable hotness that is Grant Gustin. Aside from little kids dressed up for Halloween, this guy has to be the  most precious person ever to don the red suit. I love him, I love him, I love him. I could tell you at least 10 reasons why but that’s a list for another day. Today let’s talk about him as The Flash. He is perfection in this role. He has completely honed in on the fun-loving nature of the original character and made it his own. Barry is nice, sweet, humble, nerdy, geeky (yes, those are two different things), determined, and courageous. He is also smart, funny, loyal, and loving. He is the kind of guy you want as a friend and comrade. You want him on your team because he’s not going to quit until he helps you accomplish your goal or dies trying. He’s a guy you like and desperately want to succeed. Barry is the main character of this show. He carries the story, the plot and the connection of all the other characters. This is a show about him. That’s a lot for Grant Gustin to carry on his shoulders. But he’s doing an excellent job of it. He has made us love both him and his character and I can’t wait to see what’s coming next from this show, this character, and this actor.

Do you watch The Flash? If your answer is no… Why on Earth not?! If you do watch the show, what do you love about it? Let me know in the comments.