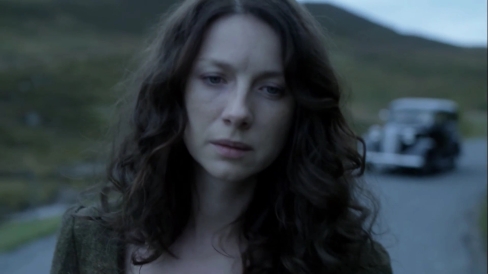 I knew what was coming. I know it from having read Dragonfly in Amber many times over. I’ve seen the trailers, even the ones that weren’t supposed to be leaked to fans, the ones that were taken down almost as quickly as they went up. I knew how bone-deep and visceral the opening of this second season had to be. But seeing it in living color, with the emotions of the moment splayed so brilliantly across the actors’ faces, left me knotted with sadness, exultation, and anticipation.

Here Be Spoilers, Yo – If You Don’t Want to Know, Then Come Back Later 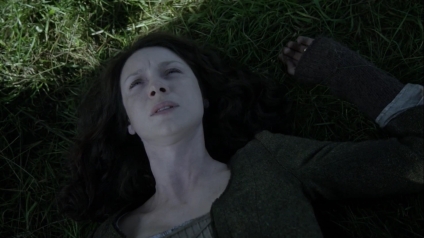 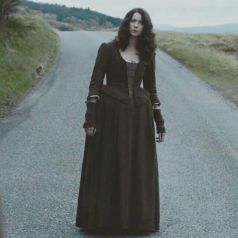 Ron Moore, Outlander’s creator and showrunner, wrote this first episode of season 2, the title based on the first portion of the book Dragonfly in Amber. Moore does his best to bring in the frame story Gabaldon establishes in the book, but, rather than putting Claire in 1968 with an adult Roger Wakefield and her daughter Brianna, the second season opens with Claire returning to 1948, nearly three years after she is transported accidentally through the stones at Craigh na Dun. The show opens with Claire waking up at the foot of the same stone she touched when she was transported, dressed in her 18th century threads still. She asks a man who stops on the road when he spies her walking two questions:

“What year is this?”

“Who won the Battle of Culloden?” 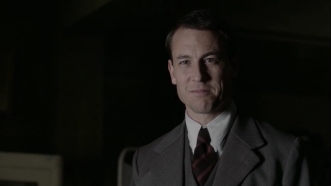 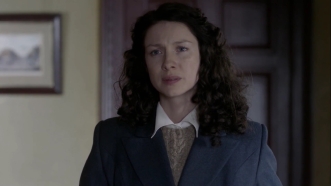 And, with that, we understand what season two is about. We already know from the end of season one that Jamie and Claire were thinking about trying to stop the Jacobite Rising and the Battle of Culloden from happening and it’s clear from the man’s answer that they are not successful. We know from Claire’s presence in 1948 that something serious must have happened for her to be back in her own time rather than remaining with Jamie in the 18th century. 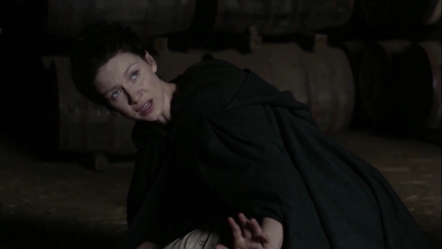 Moore has set up a tough task for himself, though, because we left off the first season in the 18th century and now we open in the 20th. How will he remain true enough to the book that readers will be happy with the visual interpretation of the text while still accommodating those who are new to the story? The opening of the book Dragonfly in Amber is startling for so many readers; the twenty-year jump takes a leap of faith that the book will reward the reader with the reasons behind it eventually. The television show plays it a wee bit safer by jumping only to 1948, still a leap of faith, but a reasonable one. It’s a big enough leap to keep the viewer intrigued and maintain the frame story that Gabaldon intends, especially since the frame story is so integral to setting up the books that follow. From watching trailers and understanding the timeline of casting for the second season, I knew that the time jump was going to be smaller, but, nevertheless, Moore couldn’t start us where we had left off because it wouldn’t set up the intrigue that the frame story creates. 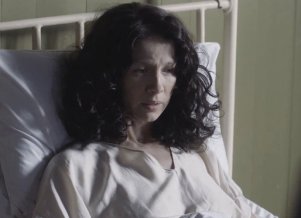 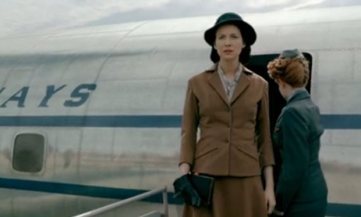 What this episode does do is give us the events of Claire’s return in much greater detail than is initially shared in the book. The immediate aftermath of her return trickles out over more than one book; Moore collects and adds detail to that information in this first episode, implicitly laying out what I expect the season’s end to be. It is clear that Moore thinks that Frank Randall should play an expanded role in the television series compared to that of the books and he plays that up here. We see how Claire and Frank work out their relationship moving forward from her return. She tries to release him from feeling obligated to help her and her unborn child, which is clearly not his; knowing that he is sterile (and therefore unable to have children of his own) and reaffirming the unconditional love he professes in the series’ very first episode, he offers to stay with Claire so that her unborn child will have a father. 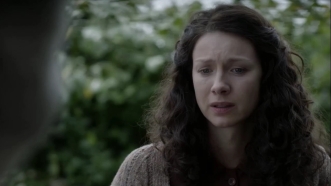 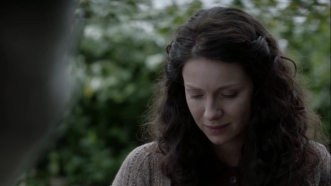 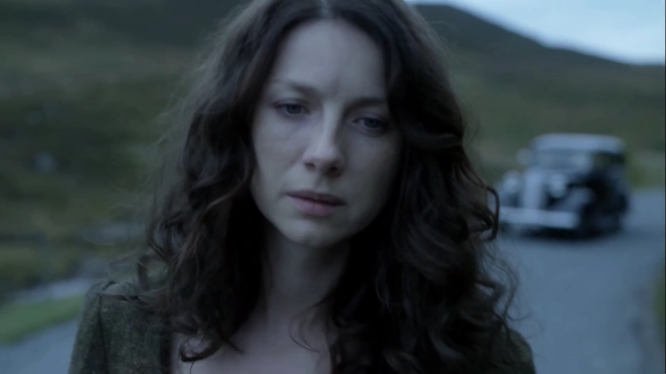 The acting in these scenes is as heartbreaking as the book hints at. Claire’s loss is written all over her: in her posture, in the slope of her eyes, in the steely disconnection from life. She lives because she promised, but she finds little joy in it for now and Caitriona Balfe exudes the disaffection in a way that is relatable. Tobias Menzies, whose portrayal of Black Jack Randall in the first season garnered him many accolades, demonstrates his range on the other end of the spectrum: the joy and concern inherent in reuniting with Claire and the overwhelming emotions still raw from her disappearance are clear and presented in the postures and tones we’ve come to expect from Menzies. He is, as usual, excellent, but, as a book reader, I was ready for his scenes to be done because I wanted to see how Moore would transition us back to where we left off at the end of season one. 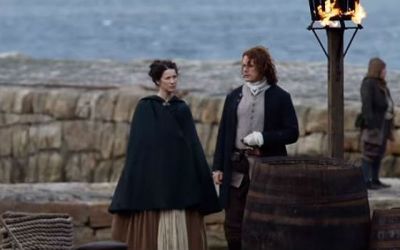 Finally, a little more than halfway through the episode, we are brought back to the 18th century, to Jamie and Claire stepping off the boat in France and trying to find a way into the Jacobite ranks in Paris. We are brought back to the immediate aftermath of Jamie’s rape and torture at the hands of Black Jack Randall and Claire’s determination to help him recover by giving them both a purpose: stopping the Jacobite rebellion that ends at Culloden and means the deaths of so many in Scotland. To book readers, these scenes are familiar, but, if I were new to the series, I might feel like this introduction to France was rushed. Moore hits all of the high points – meeting Jamie’s cousin Jared, trying to infiltrate Jacobite society, encountering the Comte St. Germain – but this portion of the episode takes up less than half of its running time of 62 minutes. While everything more has done here is important, the story feels compacted. Perhaps it’s because I’m familiar with the book and the series does not serve the same purpose for me as it might for someone who is new to all of this, but this rushed introduction to this portion of the story of Dragonfly in Amber makes me worry about how this season will unfold. This second book is longer than Outlander and the second season is only thirteen episodes, whereas the first book was somewhat shorter and the first season had sixteen episodes to tell that story. 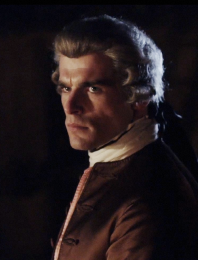 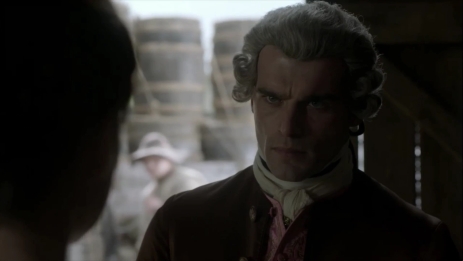 What I take away from this first episode, though, outside of my worries about how this story will be told, is the emotion of this part of the story, the contrast between how happy Claire had grown in the 18th century despite being thrown back in time against her will and the utter despair she felt at having to leave all of that despite knowing it was the right thing to do. We can debate the merits of seeing a story versus reading it, how the story told visually becomes the product of the ones making the decisions about the look and the feel in contrast to the text versions, which feels more readily like it belongs to the reader. What I have enjoyed most about this visual interpretation of the Outlander series to this point is the catharsis inherent in experiencing the emotions of this story in another way. Moore’s interpretation has been satisfactory to this point and this episode, even with its flaws, still whets my appetite for the telling of this story, for the appearance of characters which are already familiar to me, and for yet another layer of appreciation of the world that Diana Gabaldon has created.

Have you started watching the new season of Outlander? What do you think? In your opinion, how does this first episode stand up to the book? Let me know in comments. 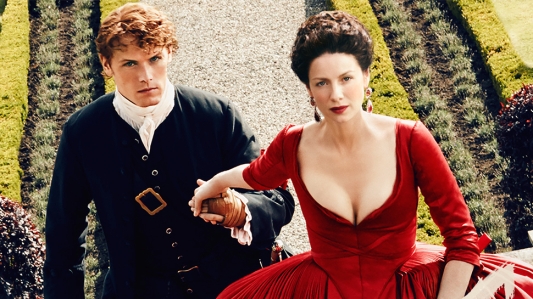