It’s finally here. The day for which 90s kids all over the nation have been waiting. This is the day that the first season of the Full House revival, Fuller House, is finally available to watch on Netflix. The show has gotten a lot of hype and attention for bringing back most of the original cast. And the reviews started raining in earlier this week, though most were less than complimentary. As a child of the 80s and 90s who grew up with the original show, I’m here to give you the real scoop on the revival. 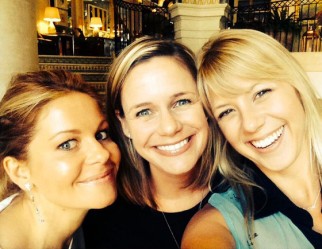 Fuller House features Candice Cameron-Bure, Andrea Barber, and Jodie Sweetin as adult versions of their original characters from Full House: D. J.,  Kimmie, and Stephanie. The three women move into the Tanner home together to help raise D.J.’s three sons and Kimmie’s daughter. The remaining original cast all show up for the pilot to help set up the premise, then bounce into random episodes individually to serve various purposes. The set-up is essentially the same as it was more than 20 years ago.

The appeal of the show and the entire basis for its existence is nostalgia. The new series was created to pander to fans of the old show and appease the curiosity we all have to know what happens to our favorite TV characters after their shows end. In this, the show accomplishes its goal. Those of us who liked it before will probably like it now, mostly just because we liked it before. Characters we grew up with are adults now and it’s fun to once again see them going through the same trials and struggles we are, albeit in a much more ridiculous manner.

The best thing about the show, surprisingly, is Jodie Sweetin as Stephanie. The character was perhaps the least liked of the original sisters, often seeming to get lost in the shuffle of Michelle’s cuteness, D.J.’s teenage drama and the silliness of the adult’s antics. However, she now helps carry the show as its brightest spot. She is the funniest and coolest character on this new series. Not as ridiculous and idiotic as Kimmie or as responsible and uptight at D.J., Stephanie is the most pleasant character to watch.

The children in Fuller House are simply sitcom kids, nothing more or less. They each serve their role in the most generic way possible. There is the young diva, the mischievous one, the precocious cute one and the baby. They serve to set up situations for the adults to deal with. If the show was geared toward a younger generation, odds are the spotlight would focus more on the younger cast members and their characters would be considerably more well-rounded. However, since this show is for the people who were young 20 years ago and now just care about catching up with the adult versions of characters they loved back then, these kids are left to be human caricatures of real children. I should mention, though, that they all do a completely adequate job filling that role.

The show is receiving a barrage of negative reviews siting its lack of originality, heavy-handed pandering, formulaic setup, overuse of laugh track, and other typical sitcom tropes. To those reviewers I say, “Well… yeah! What else did you think it would be? Did you watch the original show? Do you  know what it was? Did you not understand that this was only created as a throw-back to a simpler time before everyone knew Bob Saget was a complete tool? If you expected anything more than what this show is, that’s basically on you, not the series.”

If you enjoyed Full House, check out Fuller House. The heavy-handedness of the pilot will make you cringe–a lot. But as the series settles into its own rhythm, you can sit back and enjoy watching D.J., Stephanie, and Kimmie experience the joys of parenthood. You’ll have plenty of opportunity to roll your eyes, but you’ll chuckle a bit, too. If you don’t take any of it too seriously, you might just have a good time.

Have you watched Fuller House? What do you think of the new series compared to the old one? Do you think the new show deserves a second season? Sound off in the comments!