Is your DVR quickly filling up with all the new shows? Not sure what’s worth your valuable time? Well, I can’t know what you’ll personally like of course, but I can tell you what I’ve enjoyed so far. Here are the shows that kept their precious recording status… for now.

I’d watch this show based on nostalgia alone, but it’s also pretty damn good so far. Government conspiracies, alien DNA, and Mulder and Scully are back in full swing! Plus, episode one had Joel McHale as a paranoid TV Show host, and I already miss The Soup so much I’d watch anything with him in it!

Check out my review here.

Pretty good so far, but seems like your typical crime drama with a demonic twist. That being said, I’ll try anything that switches the roles of devil and angel, plus Tom Ellis is bangin’ hot as Lucifer (and so is the rest of the cast). For me, it’ll be competing for view time with iZombie as my go-to supernatural crime drama.

Check out my review here.

I think I’m the only person who actually likes this show, but I don’t care!! Luckily, because it’s so heavily promoted and airs on a smaller channel (Freeform), it may stick around for a bit. I hope they at least cover up to book 3. The story wraps there, but you can read three more books after that if you need more closure. (If you didn’t know already, Shadowhunters is based on Cassandra Clare’s Mortal Instruments series. Good stuff if you like supernatural YA with twisting origin stories.)

Did you laugh your ass off in The Hangover? If so, you need to watch this show. Drunken hijinks abound in this post-college coming of age story. Each starts with Cooper in a completely insane scenario, and then he goes back and tells us how he got there. Hi-freakin’-larious.

With a jumpy start and more delays than a Star Wars film, Second Chance may end before its prime. But that won’t stop me from watching it. Fast paced action, origin stories, family secrets and nods to Mary Shelley’s Frankenstein make this show extremely watchable, though there seem to be a few kinks the producers/writers haven’t worked out. Originally titled “The Frankenstein Code” then “Lookinglass”, the show may have met with licensing issues, forcing hasty changes and errors. Oh well. It’s still a pretty badass show if you can ignore the minor mistakes.

BTW: It’s about a retired sheriff who walks in on a robbery. His murder is ruled a suicide, but his DNA is a perfect match for a secret experiment that will bring him back to life, giving him a second chance to make things right. Expect family drama and constant arguments over the “right” way to handle law-breakers. Plus there might be a little transgenerational romance if you’re into that kind of thing. I’m looking at you, Twilight fans.

Still in my DVR but I intend to watch: 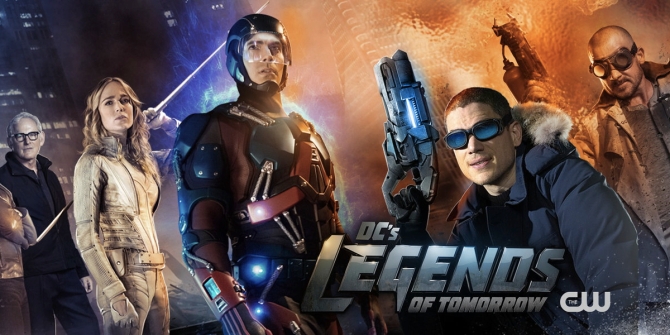 I haven’t started this show for two reasons. First, I’m not caught up on Arrow or Flash, and I feel like there might be some heavy spoilers. Second, I can’t watch it without the hubby, and he’s had a busier schedule than me lately. Were we pre-children, I’d devour every superhero show like the last slice of cheesecake. But sigh… priorities.

What do you think? Are any of these shows in your DVR? Have any opinion on something you’ve already watched? Maybe I missed your new favorite. Let me know in the comments!