Handsome boy meets cute cat. Handsome boy needs help and meets cute girl who loves cats. Sappiness and romance ensue. It’s basically that simple. But the question remains, even when a story is so simple and basic, is there really a difference between the book and the movie? The answer, as always, is a resounding, “Hell, yes!”

By now, most of our readers know of my obsession with Hallmark Channel’s Countdown to Christmas and the sappy Christmas movies that are featured 24/7 for nearly two solid months. As usual, my DVR has been jam packed with romantic nonsense that makes my husband cringe, but that I can’t get enough of. One of this year’s new movies is The Nine Lives of Christmas, a cutesy little film revolving around cats. The film features former Superman, Brandon Routh, as a fireman who becomes a reluctant foster father to a homeless cat named Ambrose. Of course, this leads to a meet-cute in the cat food isle of the grocery store between the fireman and an adorable lady cat-lover, played by Kimberly Sustad. Exactly what you think will happen happens and they all live happily ever after. While some things are the same in the book and film–the meet-cute and complications with the fireman’s horrible girlfriend–many things happen differently in the book. And frankly, it’s all quite a bit more interesting. 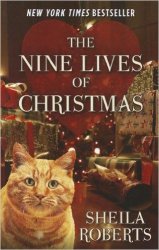 While the movie begins by introducing the human characters, the book introduces the cat first. His name is Ambrose and the story begins from his perspective with the audience hearing his inner voice. Ambrose is on his ninth life, which is currently in danger from a dog. He makes a deal with God, or the universe or whatever it is cats pray to, and promises that if he is spared, he will make better use of his last life and do something worthwhile to help someone. Low and behold, here comes Zachary, the fireman, to the rescue. Ambrose recognizes that this is his opportunity to make good on his promise. He attaches himself to Zachary and refuses to be put off. Eventually, Ambrose is fostered by the man and begins to work on improving his new human’s life.

The story gets even more interesting as Ambrose realizes that he has past ties to Zachary, Zachary’s horrible girlfriend, and Marilee, the cute cat-loving lady. He has, at some point, come into contact with each of them in a previous life. Those past encounters allow him to know more about the true nature of each of the humans than any of them really knows about each other. In the book, it is Ambrose who carries the story forward and devises means to throw Zachary and Marilee together again and again.

Strangely, the cat’s role in the book actually helps everything else make more sense. Where in the film it’s all coincidence, the book gives a reason. The cat is smart and kind of funny and determined to see Zachary with the sweet, cat-loving Marilee. It’s a fun twist that is completely left out of the film. That’s a shame, really, because it is the one thing that helps the story stand out from the myriad of Christmas romance stories swirling around the airwaves and bookshelves this time of year.

Additionally, Zachary’s entire family is left out of the movie. While it’s okay without them and in truth, they don’t add anything to the romantic story line, they do bring another level of depth to the development of Zachary as a character. The subplot of Ambrose’s own romance is suggested in the movie, but actually fleshed out in an interesting way inside the book. The exclusion of these subplots from the film don’t really hurt it, but they are just two more ways the heart of the book is stripped away for the film.

Have you managed to find a movie that’s actually better than the book? Let me know in comments so I can go watch it right away.

3 thoughts on “Book vs Movie: THE NINE LIVES OF CHRISTMAS”