Honestly, I had never seen any previews for the movie Time Lapse, but I think if I would have, I would have been curious about the film. The basic plot of the movie is that three roommates who live in a complex discover that their neighbor has a machine that can produce photos of the future. They immediately decide to use the machine to their advantage and as a result, dire consequences ensue.

There are several things I really liked about this movie. For one thing, it’s successful at remaining mysterious. We automatically think as viewers that a movie with a time machine device is going to mean lots of science fiction-y type special effects, but this movie does not rely on that. If anything, Time Lapse relies heavily on the actors themselves. As the film progresses, we see the toll that each developed picture takes on the psyche of each of the characters. We know that eventually the shit is going to hit the fan, but we don’t know which character will make that happen or HOW they will make it happen.

Another thing I really liked is that the roommates all represent some form of a struggling adult. Finn is an artist who moonlights as the apartment manager. Callie is his live in girlfriend who longs to be a writer. Jasper is a gambling addict who has an affinity for pills. All three of them dream for a better life. Enter the machine that tempts them into creating a series of events that will change their lives forever.

This movie is not initially action packed until about the last thirty minutes of the movie. It’s for those who enjoy suspense and love to try to figure out movie plots. I admit, I am one of those people, however I was pleasantly surprised by the wrap up of this movie. I thought I had it all figured out, and then it took a 90 degree turn. I think most people will like this film. I highly recommend it. It is a more serious movie that makes you think about what you would do if you had the ability to change the future. This is not like The Butterfly Effect (although I do love that movie) which centers on how consequences effect other people. No, this movie only focuses on how consequences effect each of the three characters. 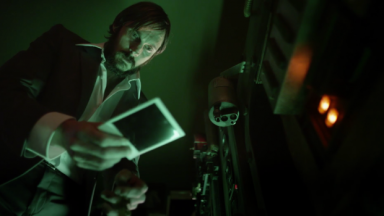 Here is a trailer to the movie just in case you’re interesting in watching. It’s available to stream on Netflix. Hope you enjoy it as much as I did!