It’s October, which means it’s time for all the horror and gore enthusiasts to lumber from the shadows and fly their frightening freak flags with pride. For the record, I am NOT one of those people. I don’t like to be afraid. I don’t think it’s fun. I couldn’t care less about the adrenaline rush or whatever. And I don’t need the images of blood, gore and mutilation rattling around in my brain. I have absolutely no desire to dwell on, think about or watch terrifying scenarios and be forced to consider how horrifically I would die if stuck in the same situation. If I want to be frightened, I just watch the news. A single broadcast is enough terror for a lifetime.

With that being said, I present my entry for this months’ Top 10 Topic. I’m embracing the spirit of sisterhood by sharing my “favorite” frightening movies, books, television shows and whatever else I like that scares the crap out of me. DISCLAIMER: I really don’t adore horror, but technically all these things fall within that genre. They are the things I’ve experienced and can think about with some fondness. Let’s get started.

I don’t do zombies. Let me say it again. I don’t do zombies. One more time for emphasis… I. DON’T. DO. ZOMBIES! They aren’t cute, interesting or funny. Ever. No, not even Shaun of the Dead. No, I haven’t and absolutely won’t watch The Walking Dead. I have absolutely not sat through 28 Days Later. Why? Because… say it with me…

But when this film was in theaters, I’d already agreed to go to the movies with a group of friends and we were on our way. Everyone except me wanted to see this one. I was forced to suck it up and take one for the team. The movie makes my list because it was funny. Clarification: The human characters were funny… the zombies were not! I did laugh. But I also had to be walked to my car afterward, checked my backseat three times and had to watch another movie to cleanse my mental pallet before I could go to sleep that night. 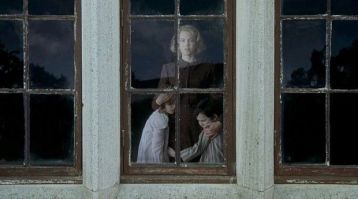 This movie I actually liked. While it’s technically a horror film (I think), it’s creepy and suspenseful without being utterly terrifying or terribly gory. It has an interesting story that unfolds in a great way. I haven’t watched this film in years, but I remember it fondly and have sat through it more than a few times in the past. 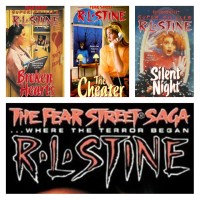 Most people remember R. L. Stine’s Goosebumps series best. But in junior high school in the early nineties, I couldn’t get enough of the Fear Street tales, aimed at an older, teenage audience. I read these so often that a teacher threatened to fail me if I turned in another book report based on one of them. My obsession with the series didn’t carry into high school. It’s now been so long since I picked up one of these books that I can’t even remember what I liked so much about them. But I loved them. So they’re on this list. 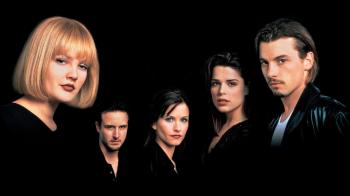 Allow me to clarify. This entry is for the first, original Scream movie. It does not encompass the entire series of films. The first movie was original, surprising, funny and scary all at the same time. It made fun of the horror movie rules while holding fast to them. The movie honored the horror genre while simultaneously redefining it. And most importantly, it was entertaining. I remember this film fondly and watched it more times than I could even attempt to count. It has to be my favorite horror film ever. Likely, it’s the only one I would even attempt to sit through today.

X-Files hit the airwaves–yes, they were still airwaves back then–when I was in junior high school. Like any other adolescent, I was a bit of an idiot. I made the mistake of watching the show at night while I was home alone. I remember very specifically this episode, which scared the living crap out of me. It was about a guy who could squeeze through air vents and other incredibly small spaces to enter people’s homes and kill them. In the end, he was caught and jailed, but the episode ended with him smiling at the thin opening in his door that the guards slid his food through. So essentially, when the credits rolled, that psycho was free! It didn’t matter that it wasn’t real. And my emotions didn’t care at all that my brain knew no such person existed. I was terrified of that guy. I watched that hour of television more than 20 years ago. Heaven help me, I still don’t look at air vents the same way.

The cover pictured above is the exact one that graced my copy of Shelley’s iconic horror story. While this book was never my favorite, I always thought it was a good one. It was thought-provoking on so many levels. During my grade school years, my writing was quite dark and my reading material was as well. Frankenstein fit in perfectly with that. I still think of this story fondly, though I can’t actually remember the last time I read it or really enjoyed a movie adaptation of it. Perhaps the new re-imagining starring James McAvoy and Daniel Radcliffe will give the tale new life. (See what I did there?)

Ted Dekker is not exactly a household name. However, within his genre, he’s sort of a rock star. He’s a very successful Christian author who writes horror novels. I think most people don’t even realize that there is a Christian Horror sub-genre, but there totally is. And while a lot of folks might assume it’s all about demons, it’s not. Some of it is actually pretty good stuff. This particular title used to be a favorite of mine. It even has a movie adaptation. When I was working at a staunchly Southern Baptist organization, I was once put in charge of planning a movie luncheon for my team. I selected this film. I spent the next the two years taking every opportunity I could to retell the story of how our team leader–a 6’3″ bald guy who used to ride bulls–screamed like a little girl and vowed never to go to movies with me again.

This YouTube webshow is Unsolved Mysteries for the YouTube generation. Each episode, Rob takes a single topic–unbelievable coincidences, mysterious deaths, unsolved disappearances, etc–and tells real-life stories that are so much stranger than fiction. It’s entertaining and totally unsettling at the same time. Episodes of the show can be found on Rob’s channel right here.

9. Anything & Everything by Edgar Allen Poe

As you’ve probably deduced, junior high was a strange time in my history. For all my disdain of horror now, I had just as much love for it then. And since Poe was the original master of the macabre, I obviously adored him. This is one that hasn’t gone away over time. I still love Poe’s tales and return to them occasionally. The Tell-Tale Heart, The Cask of Amontillado, The Masque of the Red Death and The Fall of the House of Usher are classics that will never, ever go out of style. And The Raven is simply awesome. Period. 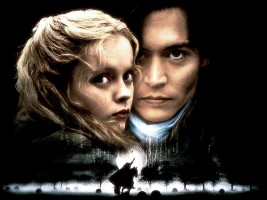 I know, I know. This movie isn’t scary. But by golly it’s in the horror genre and I’m claiming it! I love this film. I enjoy Depp and Ricci as well as the supporting cast. It’s well-acted with a good story and it is gorgeous. Equal parts creepy, mysterious and humorous, this movie is the kind of horror I absolutely can do.

And that’s about it for me. There’s not much other frightening stuff I like. For the record, I absolutely, completely and utterly hate Seven and The Exorcist. They are the two movies I watched in college that disturbed me and stuck with me so horribly and so long that I put down horror movies for the rest of my life. Also, I desperately want Stephen King or something by him to be on my list, but he’s out of my league as far as scary goes. I’m a lightweight when it comes to horror and that guy is the heavyweight champ. I won’t step into a ring with him. Also, I’m hoping one of the other sisters will have a cool haunted house on her list. I wanted one on this list, but I hate them, so… Make sure to subscribe to the site for updates and check back regularly to find out what frights the other sister geeks are into.

Take to the comments. Let me know if you love horror or hate it. What are your all-time favorite frights? Tell me about them and let me know what I’m missing. If horror isn’t your thing, either, tell me what you’re into. And let me know how you’ll be celebrating Halloween and/or Dia De Los Muertos this year.