Blindspot, which premiered last night on NBC, is the new series I’m most excited about this Fall. The preview promised a show that would be unique, intriguing, mysterious and action-packed. The pilot episode did not disappoint. It delivered on all that it promised and I can’t wait to see where it goes from here.

The show stars Jamie Alexander, who previously endeared herself to me and others as Jessi in Kyle XY and Lady Sif in Marvel’s Thor movie franchise. She is stellar as “Jane Doe,” a woman who climbs out of a duffel bag in the middle of Times Square without any memory of her life or any knowledge regarding the tattoos that cover her body. Alexander shows a terrific range of emotion from wide-eyed terror and bewilderment to staunch determination and ferocity. She is joined by a decent supporting cast of capable actors who fail to stand out quite the way she does but do a good enough job. I do want to give a shout-out to Marianne Jean-Baptiste, though, who is always pretty phenomenal in a slightly-poor-man’s-Viola-Davis kind of way. 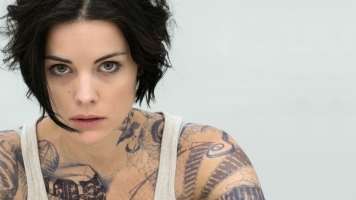 The show pulled me in from the beginning, capturing my attention and holding it throughout the entire hour. It introduced a hundred questions to be answered but gave clues, hints and glimpses to the answers. The premise is original and the show is well-executed. There is, of course, the hint of something romantic between the male and female leads and I’m sure there are shipper sites up already. However, I will be thrilled if romance is kept in the background of the more interesting intrigues this show has the potential to offer. 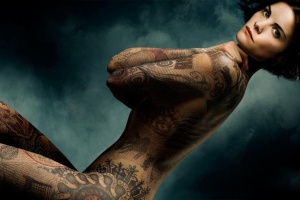 The show competes directly with Castle and if this were the days before DVR, I might have a serious problem. As it is, my DVR is set to record both shows every week and I plan on keeping it that way. Truth be told, I will probably watch this one first. And that’s saying something. I highly recommend Blindspot to those who enjoy good mysteries, out-of-the-box crime procedurals, shows that keep you on your toes, television that (at least for a while) asks more questions than it answers and shows where lack of superpowers don’t stop people from being heroes. Fans of Scorpion, Heroes, Marvel’s Agents of S.H.I.E.L.D. and the first two seasons of Lost will likely enjoy Blindspot.

Did you watch the pilot episode of Blindspot? What did you think of it? Do you see good things ahead or anticipate it will fizzle out quickly? Share your thoughts in the comments. 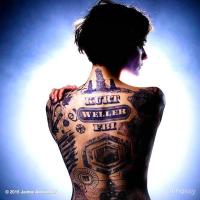