In less than one week, the final episodes of Lost Girl begin airing on the Canadian channel, Showcase. So far, we’ve been able to follow Bo on her adventures in the world of the Fae for four and a half seasons. Part two of  the fifth and final season hits the airwaves this Sunday, so now is a great time to talk about this series and some of the reasons to love it. Just a disclaimer: Season 1 is a little shaky in the first few episodes, but if you can hang in there, you’ll be binge watching before you know it. SPOILERS MAY BE BELOW.

1) Fans of Buffy the Vampire Slayer will get a long overdue “fix”.

Buffy was a kiss-ass fighter who loved fashion, her best friends, and just wanted someone to love.  Lost Girl’s main character, Bo (played by actress Anna Silk), reboots those qualities in her series.

2) It ain’t your grandparents’ TV show of choice!

The show pushes the “sexy” envelope.   I think as viewers we’re used to watching TV shows depict heterosexual relationships or gay relationships, but Lost Girl completely goes in another direction.  Bo is a succubus who feeds off of sexual energy.  I know, it sounds cheesy, but they actually pull it off pretty well.  Before long, Bo finds herself trapped in a love triangle and the audience must decide if they want her to be with the bad boy werewolf or the good girl scientist.

Kenzie is a human who gets sucked into Bo’s world.  She looks sweet and innocent, but comes from a checkered past (she lived on the street and used to be a thief).  Hmmm… I think we’re going to see some character development in the future. Remember when Willow became a badass witch on Buffy the Vampire Slayer??? 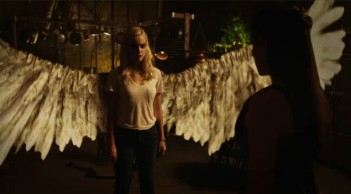 They can’t help it, they were just born bad, but Vex and Tamsin are two characters that seem to be persuaded to the “light” fae through hanging out with Bo and her posse.  Tamsin is one of my favorite characters.  She is definitely one that you can’t help but cheer for.

5) The villain we love to hate.

Evony, who plays the leader of the “dark” fae.  She has no conscience and constantly uses people to her advantage, but we just can’t help but wonder what her next move is.  Will Bo end up having to fight her in combat?  Will Evony ever care about anyone?  Her son was human, who is his father?  These are questions that I can’t wait to have answered.

It’s funny. I recall there’s actually one episode where they joke about how often he has his shirt off.  Still, I’m not going to complain.  And if I should accidentally trip in front of him and oops, spill ketchup all over his shirt so that he has to take it off…no one will be the wiser…Bwah-ha-ha!!!!

7) Nerds don’t have to live under rocks and be serious. 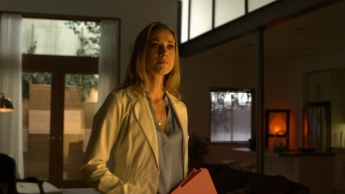 Geeky girls and guys unite!  On this show, the nerdy scientist is not a shy quiet type who couldn’t protect herself.  Nope, Lauren is a confident blonde who throws puns down while at the same time mixing important cocktails to help the “light” fae with all of their missions.

This story line is just too cool and I can’t wait to see where it heads.  The Wanderer is supposed to be Bo’s dad.  We don’t know who he is, only that he is one super bad dude and that everyone is scared of him.  The show eludes to the fact that he is on his way to get Bo by showing fortune teller cards with his shadowed image on them.

Trick looks like an ordinary guy, but we soon learn through flashbacks and dialogue from other characters that he is so much more.  He is powerful enough to actually alter events and he is probably the most powerful character on the show, but he refuses to use his powers in fear of the consequences.  I get the impression that he has many secrets and I’m curious to see what happens when they all spill out…also if they ever kill him, I will riot…or at least throw my remote control down and halfheartedly kick it out of frustration. 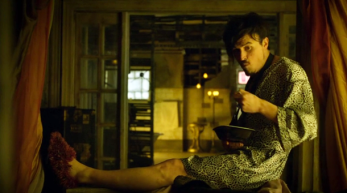 Thought Joss Whedon had cornered the market on characters with British accents?  Nope, meet Vex.  He’s immature, a little bit whiney, but also funny.  You feel bad for him because he has had some tough breaks in his life, but never fear.  Vex often comes to the aid of his BFF, Kenzie, when she is in need.  (He gave her mascara makeup tips in one episode. Guy-liner anyone?)

The first four seasons of Lost Girl are currently available to stream on Netflix. Do you watch Lost Girl. What do you love about it? Tell us in the comments.