Should you Fear the Walking Dead? Uh… maybe.

If for some reason you were hiding under a rock last night and didn’t catch AMC’s series premiere of Fear the Walking Dead… no worries! You didn’t miss enough to get left behind.

The show definitely has promise. I think it sticks to the “spin off” formula when necessary, but also has the potential to be its own entity. I’ll try to give you a few tidbits without giving any spoilers away.

First, let’s talk about the main characters the show focuses on in this episode. There’s Nick (the son who is a drug addict), Alicia (the daughter who is perfect), Travis (the mom’s boyfriend who wants to fill in as the role of a dad), and Maddie (the mom who seems to want to save Nick from himself more than anything). I will point out that Travis also has a biological son, Christopher, who lives with the biological mother, but they are in separate locations. Just a note that a commercial for the next episode looks like it teases a possible reunion.

I noticed some differences in the cinematography of this show, which makes complete sense. There are brighter colors, the buildings look newer, and everything in general just looks sharp, clean, and organized. I would expect that, though. After all, we have to keep in mind that this world has not gone to hell in a hand basket yet. We’re seeing a pre-apocalyptic L.A.

The music is also different. While we have come to expect southern influenced sad and slow music from The Walking Dead, Fear the Walking Dead presents us with high-pitched, quick electronic music. Two different types of music for two different worlds.

Before watching this show, fans may want to consider how dedicated to the comic books they need this series to be in order for them to like it. I say that because while The Walking Dead feels like a walking, breathing comic book, Fear The Walking Dead, feels like it’s trying to be a movie. Don’t get me wrong. I’m not saying this is a bad thing. I’m a huge fan of the film, 28 Days Later, so I like movies like this. I’m just saying that if you are able to separate those two universes, then you will be able to appreciate this show. If you can’t, well then you probably won’t like it.

While we’re discussing similarities and differences in the shows, I would like to delve a little more deeply into the character of Travis. He’s a school teacher, but definitely has characteristics that I feel make him similar to Rick. I think this was a smart decision made by the writers. They are getting viewers to feel attached to a character that feels familiar. Like Rick, Travis is an authoritative figure that people, such as his students, naturally respect and look up to. He uses that natural ability to persuade people to do what he wants rather than force them–just like Rick does. Travis also has a big heart like Rick, but he doesn’t have a hard time pushing his heart to the side if the situation calls for it. 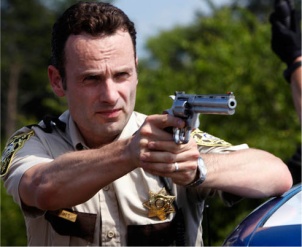 There are a couple of things in this episode that I would like to point out that won’t spoil anything. I think these were meant to be “nods” to the original show. For starters, the zombies on this show are newly dead, so they do not have the same decomposed look as the zombies we’re used to seeing on The Walking Dead. I think that’s because we’re used to seeing that “flesh falling apart” look, I had forgotten how “shiny” and “blue” newly dead zombie eyes are. (Yes I realized how funny that sounded when I typed it). They reminded me of Andrea’s sister Amy, which I thought was a nice little flashback to early episodes of The Walking Dead. I also enjoyed a scene where there is a playground full of people and then later on, just a single man slowly walking across that same playground. This reminded me of the opening credits of The Walking Dead when there is a zombie walking across a field by himself. The playground scene felt lonely, abandoned, and a precursor of what is yet to come.

There are also a few symbols in the episode that I feel are significant, but I’m not sure if they will lead to anything later…so here is my interpretation of them for now.

In this episode, two different characters drop coins and one drops a receipt. For now, I think this could be represented as shedding of the old ways. Money won’t mean anything in the zombie apocalypse. The other thing is there is a scene where a close up of a broken cross appears a couple of times. This is really nothing new in The Walking Dead universe. Characters are constantly bombarded with the question of what role religion plays in a zombie world, but I think that the cross probably represents a broken world. The church that the cross is in is abandoned and shut down. It’s empty and maybe that is supposed to be like the park was-a precursor of what is yet to come. Still, I can only speculate, and I am interested to see if the symbols of money and religion pop up again. After all, The Walking Dead isn’t just a zombie show. It’s also, in a way, a show that comments on the problems of today’s society. Will Fear The Walking Dead try to take on a similar role?

I am a huge fan of The Walking Dead, so of course I want this show to succeed. That way, I can get my “Dead” fix during the off-season. However, I am skeptical because generally spin-off shows don’t do well. Still….if Agents of Shield was able to spin-off Agent Carter as well as interweave several Marvel universe movies within itself, there might be hope, right? Honestly, the only ones that can really say are the fans. I guess we’ll all have to stay tuned to see if we really SHOULD Fear the Walking Dead. 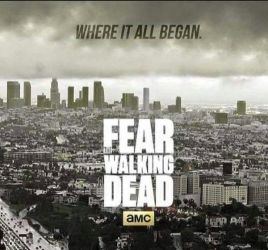 For all of you UN-DEAD fans, here is a clip from Fear The Walking Dead, which airs Sundays at 8/9pm central time.

Also, the original series, The Walking Dead returns in October! Woohoo!!! Here’s a clip for the upcoming season…