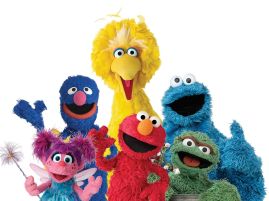 There was a lot of info put out this week. So take a look at this list of more news you need to know:

9. Sesame Street is Heading to HBO

After more than four decades, Sesame Street is packing its bags and heading to a new network. HBO? The educations children’s show has made a 5-year agreement with the premium cable network. It will increase production of episodes from 18 to 35 per year and those episodes will air on HBO before trickling down to PBS months later. The move seems strange, but makes a lot of fiscal sense as HBO can help pay bills PBS never could. (full scoop here)

10. New Material from Tolkien is Coming

A new title from J.R.R. Tolkien is coming to bookshelves next April. The Story of Kullervo was written by the legendary author in 1914 and revolves around a young man, a dark magician and revenge. The title is currently available for pre-order from Amazon. (more here)

The character names and descriptions have been revealed for the Power Rangers reboot that is currently in the works. The new information lets fans know that the movie will feature the heroic team from the original American version of the series that began airing in 1993: Jason, Kimberly, Trini, Billy and Zack. The film is set for release in January of 2017. (additional details here)

12. Jason Vorhees is Coming to TV

The CW is the baby brother of television networks, but that can sometimes be a good thing. When there is not so much at stake, the network can often afford to take greater risk and hang onto things they like even when the numbers don’t always compete with the big brother network shows. These days, CW is taking chances on a number of franchises: Riverdale, Frequency, Little Women and The Notebook. Now they are adding the frightful movie series, Friday the 13th to their roster. The spin-off of the 13-movie franchise is in development now. The show will be a one-hour drama. (extra info here)

The NBC show, Constantine, starred Matt Ryan as the titular character and failed to make it very far during the 2014-15 season when it premiered. The CW has announced that Ryan will return to the role for a special, one-off appearance in an upcoming episode of Arrow. This will likely not lead to a revival of the Ryan’s series about the supernatural expert and exorcist. But fans dream. (find out more here)

14. The Fresh Prince of Bel-Air is Getting a Non-Reboot

Reports are popping up in news feeds everywhere that Will Smith is rebooting The Fresh Prince of Bel-Air. Those reports are almost right, which is to say they’re exactly wrong. The star’s company, Overbrook Entertainment, is in early stages of developing a show that draws parallels to the 1990’s sitcom that launched the actor’s on-screen career. Because of this, it has been referred to as “a new Fresh Prince,” but the project is not an actual reboot… at least not now. The most interesting question about the show, however, is not whether or not it’s a Fresh Prince reboot. The real question is whether or not anyone besides Jaden Smith has a snowball’s chance in hell of starring in it. (full story here)

15. The Xena: Warrior Princess Reboot is a Thing Again

The Xena reboot is happening. No, it’s not happening. Now it’s happening again. And my head is spinning. Last week, news broke that a reboot of the epic series was in the works. This was largely based off comments by the show’s star, Lucy Lawless, who said in an interview that she would like to reprise the role. The news spread like wildfire and Lawless was forced to shut it down, stating that her comments were based on wishful thinking, not any actual plans for a reboot. Now, NBC’s Entertainment chairman, Bob Greeblatt, has confirmed that a reboot is currently in early stages of development. No details on the direction of the show are known yet and no writer has been hired yet to pen a pilot. However, the network is working to have the show ready to hit screens in 2016. (all the 411 here)

16. A Deadwood Reboot is in the Works

Deadwood fans should cross their fingers, hold their breath and move very, very slowly so as not to spook executives at HBO, who have confirmed they are in “very preliminary discussions” about resurrecting the series with a movie. The series ran on the premium network for three seasons from 2004-2006. The network previously promised two films to complete the show’s story but this is the first hint that even a single movie could be a reality. (see more here)

In case you missed them before, you can click over to our full Geek News stories from this week about Zac Efron in the Baywatch reboot and new details about Frozen 2. Check out Pt.1 of this week’s Top Stories here.

What geek news are you excited about this week? What stories did I leave out? Let us know in the comments below.