We do love the supernatural around here. The Mercy Thompson series of books by Patricia Briggs gives us a heap of all the stuff we like most about the genre. Made for an adult audience, the books revolve around main character, Mercedes “Mercy” Thompson. Told from her first-person perspective, the stories follow Mercy’s adventures as she deals with werewolves, vampires, witches, Fae and more. Here are ten reasons you should be reading this series:

1. The Awesome and Hilarious Mercedes Thompson

The protagonist of this series is Mercedes “Mercy” Thompson. She is a Volkswagen mechanic who also happens to be a Native American shape shifter. She can become a coyote at will. Mercy was raised among werewolves, has a neighbor who is the alpha of the local werewolf pack, a boss who is Fae (fairy-folk) and a very close friend who is a vampire. Despite her best efforts, she doesn’t manage to keep a low profile and ends up in all kind of misadventures with local supernatural beings. However, she is stubborn enough not to let fear stop her and badass enough to defend herself when stuff hits the fan. Mercy has a smart mouth, martial arts training and a gun. She doesn’t let anyone push her or her friends around. She’s the kind of positive female protagonist that we desperately seek in our culture, but often overlook when she appears.

2. Werewolves and the Pack Dynamic

This series is filled with lots of werewolves. Yes, many series have werewolves. However, here readers are given great depth of insight into the dynamic of a wolf pack and the way relationships and communication work inside it. It’s intriguing to think about and adds layers of complexity to the series. It’s enough to make readers begin to think about the subtleties of their own relationships.

3. Vampires Who Are Monsters

The vampires in this series are monsters. Even the one who is friends with the protagonist takes opportunities to remind her that he is not a hero or a good guy. He is not a “vegetarian.” He feeds off people. He is a killer. He is a monster. He doesn’t sparkle.

4. Fae Who Are Dangerous

The Fae in these books allow for a lot of different types of powers and lots of different sources for those powers. The Fae are “out” in this series, which means they present themselves to humans a certain way and try to conceal just how dangerous they truly are. This adds even more complexity to the characters’ interactions and motivations.

Mercy is Native American as well as being considered a coyote in wolf territory. There are certain wolves who would like to see her outed. Her love interest is white and a werewolf. The wolf-pack she lives near has a second-in-command who is African-American and Chinese. There are several Hispanic characters. One of Mercy’s best friends is a gay, male werewolf who holds a position of considerable rank within the pack. You better believe that comes up more than once as other characters pose opposition to him. The Fae are “out” to humans and subject to a lot of prejudice as a result. They have even been forced to register with the government and are relegated to living on a reservation. Themes of prejudice, intolerance and acceptance run strongly throughout the series. It is another thing that adds to the depth and complexity of the books. It also creates realistic dynamics between characters and conflict that speaks to real life in a way fiction sometime fails to do.

One of the reasons I love books, television and movies in the supernatural genre is discovering the unique mythology of each world. In another book series (that I’m not a particular fan of), the vampires sparkle in the sun. In these books, they are dead during the day and turn to dust in sunlight. In some stories, werewolves only change at a full moon and the process is quick. Here, they can change at will, but it is painful for them and takes 15-20 minutes. Getting to know the unique mythology of this series and all its different creatures is fun and interesting.

There is sexual tension in this book that eventually becomes something more. It’s a slow build and in the meantime, the characters are not getting much action. Sister Geek, Jen P, would likely not approve. Others would probably agree with her that more of the “good stuff” is needed. However, I like the way the relationship builds up gradually, with a strong foundation under it. I find that more romantic than fly-by-the-seat-of-your-pants, hot-and-heavy love affairs. Also, I’d like to point out that the romance here does build to something, so there isn’t a total lack of action. However, it leans more toward the mild PG-13 variety rather than the more graphic R or NC-17 description that some people prefer. I like the way Briggs handles things in these books, though. It fits well with the story and the voice of the character. I believe any more would likely be distracting in a negative way.

The characters in this series change over time. So far, there are eight titles and I would argue that none of the characters are the same as they were seven books ago. That’s a good thing. Characters that don’t grow and develop are stagnant, stale and boring. It’s fun to read about the change in the characters and anticipation is created for how they will change with each book. UPDATE: There are now 11 books in this series. 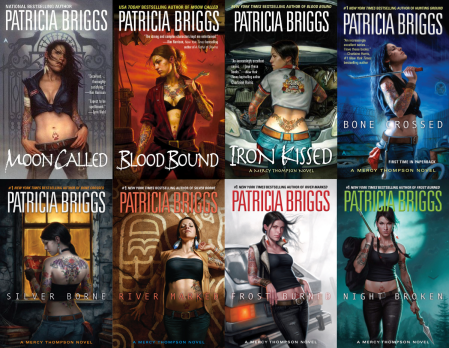 A friend once gave me a book and told me it would be one of the best I’d ever read. He warned me, however, that it ended abruptly and no sequel was yet on the horizon. Eventually, the sequel was released… 6 years after the first novel had been published. That nonsense is not the case with Briggs’ series. A new Mercy Thompson book has been released nearly every year since 2006 (all except 2012).

This is something that I’ve found many people take for granted when choosing what to read. Most of my friends will push through with a badly written book simply because they’ve started it. I don’t do that. Life is too short for poorly written prose. Patricia Briggs is a good writer. Her books are well-crafted, easy reads. They draw readers in quickly and hold them captive in the best way.

Have you read any of the Mercy Thompson novels? If so, do you agree with my list? Tell me your thoughts in the comments. If you go check out this series, come back and let me know what you think.

The Mercy Thompson books by Patricia Briggs flow chronologically in the following order:

Shifting Shadows: Stories from the World of Mercy Thompson (2015)