We’ve all read it, seen it, heard it. It’s the most famous line associated with the character, comics and movies of Spider-Man. “With great power comes great responsibility.” It’s concise, eloquent and profound. Too bad it’s also a misquote.

Well, it originally was, anyway. Back in August 1962, Spider-Man was introduced by Stan Lee and Steve Ditko in Amazing Fantasy #15. At the end of that story, Peter’s Uncle Ben is robbed and killed by a man that Peter intentionally failed to stop earlier in the night. That part we all know. However, the original power and responsibility line appeared in the last panel of the comic after Uncle Ben had already died. It was a realization that Peter makes on his own and it is not actually spoken by anyone. Also, it was worded a bit differently: “…with great power there must also come — great responsibility!” The original wording and the more popular twist on it both say essentially the same thing, but they are technically different. 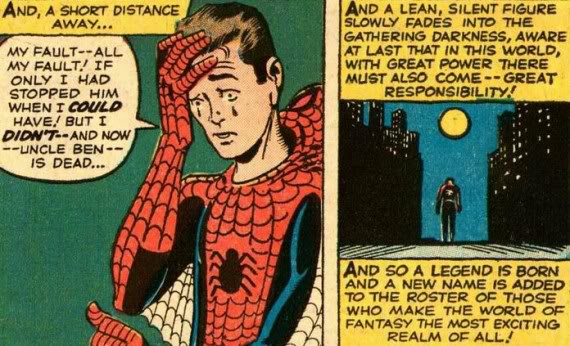 As often happens both in pop-culture and in real life, the lie becomes so wide-spread that it manages to morph truth. Due to the popularity of the misquote, it was later put into the comics as canon and officially attributed to the web-slinger’s deceased uncle. So, at this point, the miquote is not a misquote. And yes, Uncle Ben did say it. However, it’s always good to know where we’ve come from. After all, knowledge is power. And with great power…