So it turns out that Chris Pratt is completely okay with being objectified. This is good news for me because I very much enjoy objectifying him… a lot.

Pratt made a name for himself as the pudgy Andy Dwyer on Parks and Recreation. In order to move to the next level of stardome and become an action hero, he shed his extra pounds and toned up in 2013. Pratt debuted his new physique in Guardians of the Galaxy last year and has since become a sex symbol and top-tier man-crush the world over. Last month, he was featured by Entertainment Weekly as eye-candy for their summer calendar.

In a recent interview with Yahoo, Pratt commented on this new element to his fame. Not only is he okay with being objectified, he thinks men should be objectified more to create an equality of objectification. Pratt says, “I think it’s appalling that for a long time only women were objectified. But I think if we want to really advocate for equality, it’s important to not objectify women less, but just objectify men as often as we objectify women.”

Not only is he good-looking, but he’s hilarious and an advocate for gender equality. What else could we ask for? Since we want to support Chris and his cause of equality, here are a few other images of his bodacious bod and face for our viewing pleasure. Objectify away! He wants you to. 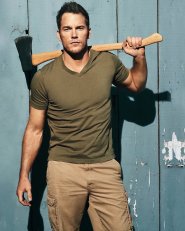 3 thoughts on “Good News! Chris Pratt is Okay With Being Objectified.”