This weekend, while everyone else helped Jurassic World join the big leagues with opening weekend records, I paid money to see Kingsman The Secret Service on the big screen for the third time. I know. It seems obsessive. But my reasons were good. You see,

while having dinner with a friend on Friday night, I discovered that she hadn’t yet seen the film. Then we found out that it was still at one of the theaters in town despite having already been released on Blue-ray. Because I love my friend and want good things for her life, I explained that she needed to experience this movie on a big screen while she still could. Then, because I’m a good friend, I took her to see it.

Naturally, she loved it. As we talked after the movie about all there is to love about it, I had the thought that there might be others who hadn’t yet seen the film and were unaware the awesomeness they were missing. Because I also love you geeks, I’ve provided the breakdown here for some of the things to love most about Kingsman. For the record, it was very, very difficult to narrow it down to just ten. But for you, dear ones, I did it. Here they are:

Taron Egerton is hot. Over the course of the film, he suits up and manages to get even hotter. He’s athletic in a way that makes it pleasant to watch him move. His actions, reactions and facial expressions are often hilarious and sometimes heartbreaking. He makes the audience root for Eggsy through this entire film, even when he’s being a thug. By the end of the movie, I always find that I have an overwhelming desire to cheer for this character and the growth he’s had over the course of the film. Did I mention that he’s hot?

Colin Firth has always been a favorite of women world-wide as a romantic lead in both comedies and dramas. And though I could see what was appealing, he was never a favorite of mine. Until now. Firth totally kicks ass in this part. And I mean that in every sense of the word. He owns this role of gentleman spy. From the way he walks to the way he talks to the way he delivers quiet wisdom to his protege, everything about this character draws the audience in and makes them trust and believe in him. Then, of course, there is the beautiful, graceful violence that leaves the audience breathless with gaping mouths. I’ve never seen Colin Firth like this. Me likey! And I want more. 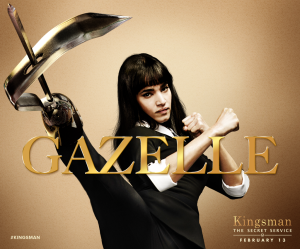 While we’re on the subject of grace and beauty, let’s talk about Gazelle. This character is amazing! Yes, she’s obviously a complete sociopath because the death of millions of people doesn’t even make her blink an eye. Also, it doesn’t bother her at all to cut people in half. Even with all that, though, you have to admire the grace with which this girl moves. It’s awe-inspiring. And can we talk about her blade legs? Please? Because those things are fan-freaking-tastic! She is such a cool, over-the-top spy movie henchman… err, henchwoman. I don’t want to like her or think she’s cool, but I do. I really, really do.

Jackson is excellent. All the time. In everything. I’m sure there is someone somewhere who doesn’t agree with that. But that person is wrong. In this movie, Jackson plays super-rich super-villain, Valentine. The character is unlike most of his other roles in that he is unassuming, non-agressive, the opposite of a total badass and squeamish to the sight of blood. Unlike the usual type Jackson portrays, this character is cheerful, personable and deranged in a quiet, creepy way that is not obvious at first. I remember having a conversation with someone not long after the movie came out. They mentioned that they did not like the “useless” lisp with which this character speaks. I didn’t argue at the time, but I would like to say here that I don’t think the lisp was useless. It was instead another way to differentiate this character from Jackson’s others because this one didn’t sound like him. Also, it helped to establish the air of harmlessness this character put off until his plans were revealed. Valentine is a wonderful villain; one that breaks archetypes and offers something fresh for both spy movie fans and fans of Jackson as an actor.

This movie is uproariously funny. However, the characters never really make jokes or laugh at themselves. If someone was to describe the situations in the film that make the audience laugh so hard, the listener would likely not understand why they’re so funny. It’s “you had to be there” kind of stuff. But it really is very funny. The humor is dry and born from the way the characters communicate, express themselves and interact with each other. There is also a very dark humor to the way the violence is portrayed in this film. It is somehow horrifying and hysterical at the same time. Speaking of which… 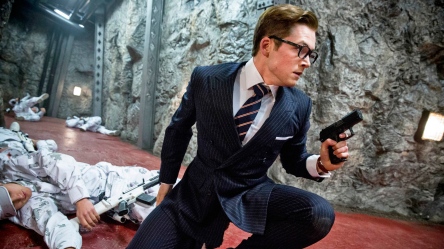 This film is wonderfully violent. There is killing and maiming and slicing people in half and blowing up people’s heads. Seriously, it is absolutely terrible and utterly wonderful at the same time. There are two reasons in particular that I enjoy the violence of this movie so much. First, there is blood but not a focus on gore. I prefer that method to the one where the entire screen is bathed in blood. The latter scenario always pulls me out of the movie and makes me focus on the wrong things, like what substance they used to make the fake blood and how many gallons were used during production and how easy or difficult it is to clean the stuff off the set and out of costumes. I didn’t have to think about any of that during this film. People were killed, there was blood and they moved on. Well done. The second thing that is so terrific about the violence in this movie is how graceful it is. The characters are athletic and move with a gracefulness that is beautiful to watch. On top of that, the cinematography is fluid and seamless as it follows the graceful movements of the action. It all comes together to create an effect that lets us see horrific things up close and somehow, view them as beautiful.

Do I really need to explain this? Just look at the suits. I mean… dayum! Am I right?

8. The scene with Freebird

There is a lot in this movie that the audience will be totally unprepared for when they begin watching it. The most significant example of this is a certain scene set inside a church where Colin Firth showcases a level of bad-assery that can’t even fully be expressed in words. And if that wasn’t enough, the entire thing is set to Freebird. When this scene happens, the brains of those watching explode a bit and the remnants sort of ooze out of their ears. They don’t even mind, though, because the entire thing is so enjoyable in that horrific way I was talking about earlier.

9. The scene with the fireworks

This is another one of those things in this film that catches the audience by surprise. The context of this scene is amazing and the execution is hilarious. The character, Merlin, sums it up nicely when he says, “That is f***ing spectacular!”

Before revealing the final item on my list, I have to mention these other things that were utterly fantastic and helped make this movie so much fun:

10. The scene with the princess

On the heels of the fireworks scene is this little gem, where Eggsy interacts with a princess. Only this chick is not exactly Disney material. The friend who joined me this weekend leaned over at the end of this scene and asked, “Did she just say…?” I nodded. Yes. Yes she did.

Kingsman The Secret Service is available on DVD and Blue-ray as well as digital download. The sequel has been green-lit and is being written by Matthew Vaughn, who directed the first film and is set to direct the second. Yay! We here at Sister Geeks will keep you updated of developments for this sequel and we’ll see you at the theater opening weekend, whenever that will be (fingers crossed for 2017).

One thought on “10 Reasons We Love… KINGSMAN THE SECRET SERVICE”