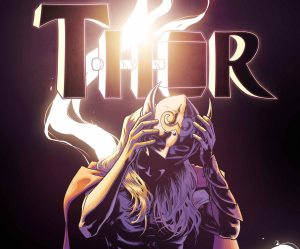 Let’s talk about the amazing THOR Goddess of Thunder for a minute. This is one awesome chick! First of all, she became a superhero by accident, but embraced the calling and took up the fight because it needed to be done. Second, she is not allowing other people’s prejudices and misogyny to deter her from her goals. Third, she keeps on fighting, even when she’s getting her butt kicked and it would seem prudent to retreat or surrender. She digs deep, pulls more strength from herself and continues to the battle.

THOR doesn’t boast or brag or try to take anyone’s place. She is keen to keep others out of harm by discouraging them from joining her fights. And while she could do better accepting help, she is still willing to be a team player when she does end up fighting beside others. Did I mention that she can do things with Mjolnir that beefcake THOR never could? This THOR is a refreshing hero and as of this week, we finally know exactly who she is.

You wanna talk about being struck by lightning? This reveal was everything I was hoping for and more. I can’t wait to find out what’s next for the Goddess of Thunder and see just how long she can keep her secret from the hunky Prince Odinson. Time will tell.

Have you gotten to the end of Issue 8 of THOR? Were you surprised to find out who the hammer found worthy? What do you think will happen from here? Let us know your thoughts in the comments.